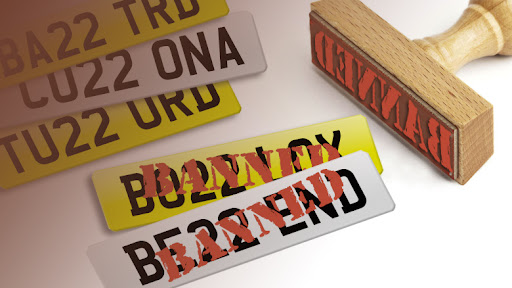 Deja vu all over again

Yes, it's moral panic time again. As the darkness of winter recedes and spring brightens our days, it is easy to forget that evil still lurks in the shadows. But fear not: just as the self-proclaimed 'Witchfinder General', Matthew Hopkins, stepped up to save 17th Century England from a plague of witches, a comparable champion keeps the present-day UK's population safe from the threat of wicked car number plates.

Of course, regular blog readers will be very familiar with the subject as we have covered it before - several times. We have also reported similar censorship exercises applied to number plates in other countries.

The first of the 2022 releases

DVLA has released the list detailing the selection of vehicle registrations it has withheld from the 22 series, the first of 2022's releases. As usual, the list presents a mixed bag. There are the usual, vague resemblances to formal and slang terms for genitalia and sex; there are equally debatable references to the Covid pandemic, general insults, political positions and more. A few combinations are banned as a matter of standing policy, so registrations containing ASS, BUM, SEX, for example, are routinely withheld. There are 343 plates in the full list of affected 22 numbers: here are a few.

* Asterisk above is used as a wildcard character, meaning that the combination is withheld regardless of which character would appear in the position occupied by the asterisk.

As always, while some of the decisions are completely understandable and defensible - the removal of plates that might be exploited by hate groups, for example - just as many of the censored combinations simply seem baffling. Even with our 40 years of expertise in deciphering the character combinations on number plates, we just can't figure out what some of the banned plates are supposed to spell, let alone how they may be offensive. Ah, well, we should know by now that government departments move in mysterious ways.

Find your own naughty number plate!