A personal plate for the devil? 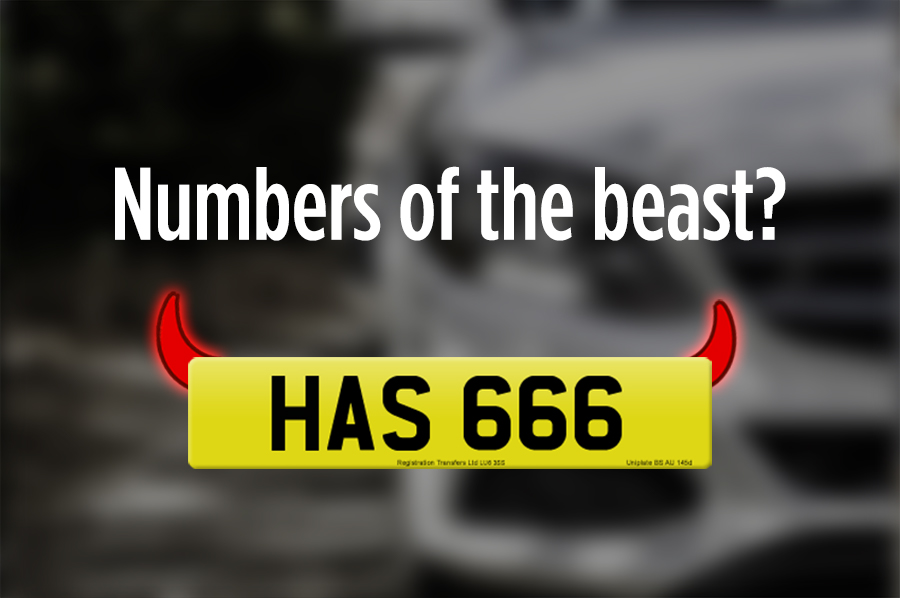 Not really, we're just joking, but after some of the nonsense we've read on the subject over the years, one might be excused for thinking that the country's morality is under threat. We don't know if people just have short memories or if they really do get that excited about "offensive" number plates but once or twice a year the ladies and gentlemen of the press get themselves all fired up over it. The newspapers have published essentially the same story countless times over the years, about how DVLA censors a certain proportion of numbers from each registration release because they are considered potentially rude or offensive. Still, we suppose it saves them having to find something new to write.

Why number plates get "banned"

That's not to say that it's daft to withhold certain combinations. Although the DVLA receives a lot of criticism for some of the seemingly inexplicable things they decide to ban, there are plenty of cases where one can easily see why the release of certain numbers could cause trouble. We may sometimes disagree with DVLA's judgement, but we don't envy them their responsibility. After all, it's about more than a few rude words.

It was decided recently that registrations that resemble the term "Covid-19" should be withheld and/or withdrawn. This is, perhaps, one of the more straightforward interventions of this type. The pandemic has cost lives and caused immense distress to many people so it is understandable that number plates reminding people of the virus might be considered to be in poor taste. In this case, the UK isn't the only country moving to ban "Covid" plates: Australia has already adopted the same approach.

Many registrations are held back because they are deemed to resemble terms pertaining to serious, potentially inflammatory topics of ideology, politics, religion, ethnicity, sexual and gender identity, drugs and violence or references to hate-groups, criminal organisations and terrorist groups. The UK may be proud of allowing relatively free speech but it can be hard to understand why people would want to express, or even hint at, certain things.

And then, of course, there are the rude words. Yes, we know that's really what most people are interested in: never mind politics and ideology, can you get a number plate with BUM written on it?

Culturally, we British still sometimes consider sexual references to be rude, embarrassing or offensive and, until we grow up, DVLA has been trying to spare our blushes by removing apparent references to sex organs, sexual activities, fetishes, sexual slang etc from our number plates. Naturally, this is the area that the newspapers, especially the tabloids, find particularly fascinating and worthy of annual repetition. When one considers the tabloid press and its immature fascination with all things sexual it becomes hard to ignore their frequent hypocrisy in the area.

Some years ago, one of the UK's biggest tabloid "newspapers" ran a story about a man whose sole claim to newsworthiness appeared to be that he was blessed with certain bodily parts of remarkable magnitude. That's all: no achievements mentioned, no evident talent, no criminal infamy, just a prodigiously proportioned bodily feature. A few days later, that same publication declined to publish an advertisement from Regtransfers because the ad included the number plate PEN 15. True story, although we could hardly believe it ourselves.

Combinations withheld from the 2020 release of the "70" number plates include AS70 OLE, BO70 CKS, BA70 ARD, SH70 AGG, SO70 OMY, TE70 ROR, VA70 GNA and hundreds more. As one can see, the resemblance to the sensitive term in question need not be particularly close for the agency's censors to get twitchy; even the vaguest, potential connection is enough. Anyone scanning through the full list of proscribed registrations will find most entries baffling. The majority (to our eyes at least) are either unrecognisable or bear such a weak resemblance as to require a real effort of imagination to see it at all. Don't take our word for it: check out the full list here and see how many you can figure out.

Every year we see these lists of the number plates that have been held back from release. However, underlying those annual updates, there are formulae that make it possible to predict, to some extent, many of the plates that will be taken out of each release. In the list above you will see some partial registrations in which one or more characters have been replaced by the asterisk used as a "wildcard" character. This means that every number including the combination shown counts as being in the list, regardless of which character appears in the wildcard position. For example, the list contains BO70 CK*, this means that BO70 CKS is banned because it contains BO70 CK: the S in the wildcard position at the end makes no difference and replacing it with any other character would still result in a banned combination.

For an even longer illustrative list, see this one, published a few years ago, which includes a huge selection of banned numbers from previous releases. It provides a fascinating insight into the workings of the censor's mind.

Find your own naughty number plate!