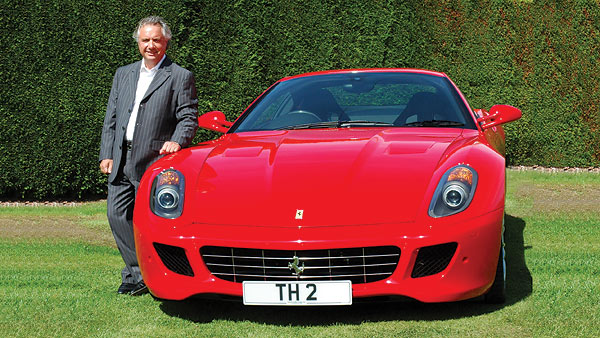 What kind of people own personal car registrations? Never thought about it? We have featured many top celebrities in these pages, and those are the people who one might most instinctively expect to adorn their expensive cars with private plates: sports people, pop stars, actors . . . However, look past the magazine covers of our back issues and you will begin to notice that a significant number of personalised car registration owners are business people. Not just average business people, but those very sharp, spectacularly successful people whose extraordinary achievements are the stuff of the weekend colour supplements. Many of the country’s favourite high-profile high-flyers are personal car registrations enthusiasts: Sir Alan Sugar, Theo Paphitis, Duncan Bannatyne.

The senior Tom Hartley is well known as the man who founded the multi-million pound Tom Hartley luxury performance car dealership based in rural Derbyshire. Tom Jr., who is our host when we visit the business, is already an experienced businessman in his own right, and has played a major role in the building of the company into what it is today.

At 24 years of age, Tom is already a veteran salesman. He sold his first car, a Porsche, when he was 11 years old, and was a millionaire at 14. The latter achievement meant that he was the youngest self-made millionaire that Britain had seen. This enabled him to buy into the business as a full partner at 16 years of age. Clichés such as “precocious” and “meteoric” barely begin to describe his rise to date. If an author were to write Tom as a character in a novel, the critics might pan it as unbelievable.

There is nothing of empty nepotism in this family business. Hartley Jr’s position is justified by both experience and hard work. In many areas, Tom Jr runs the day-to-day business of car sales, leaving his father free to attend to other matters. This works out fine for both men: Tom Sr is passionate about selling – selling anything – he loves the hunt for a deal, whereas his son is much more car focused and his enthusiasm is clearly for the product he sells. Tom Jr knows these big-ticket cars well. He knows specs, characteristics and he knows the market.

The younger Tom enjoys the opportunities he gets to drive all his favourite cars. A week before our visit he turned up at the hospital in a new Rolls-Royce Phantom Drophead – the first one in the country – to collect his wife and new baby daughter.

Where the two men do coincide is in their willingness to take a calculated risk. The business, by its edgy nature, is all about risk. The Tom Hartley name is synonymous with the ability to meet demand that other dealers can’t satisfy. In order to keep that edge and the reputation that rides on it, the Hartleys sometimes have to adjust margins. They are determined to be the first, and for as long as possible, the only place that the very newest, most prestigious vehicles can be found.

There are people who will pay a premium to be driving the season’s must-have luxury motorcar around town while the ordinary buyer is still on a less enterprising dealer’s waiting list. It is the speculative nature of the business that makes experience and instinct so important. With Tom Sr it is the lifelong, intimate knowledge of buying, selling and dealing that gives him his confidence. For Tom Jr, those aspects are already well developed, but that extra depth of interest in the cars adds another strength.

Despite the element of gamble, in one way the Tom Hartley business model may just give them an advantage in times of economic uncertainty. Tom Hartley is a flexible business. Their methods mean that they are not tied to list prices. They can adapt, buy and sell at the prices of the moment.

Tom Jr sums it up: “The economy doesn’t affect our business like most. We buy in at the price we know we can move the car at. Unlike other dealers, people can come and pick and choose from a variety of luxury cars. That’s one of the reasons we are the most successful dealership in the country. We get the first of every car and there’s a premium for that. People know that when they want a car that no one else can get, they can come to Tom Hartley.”

In addition to that reputation for being able to get hold of vehicles that are pretty close to unobtainable, Tom reckons that the ambience of their premises plays a part.

“We’re a bit like a home from home,” he says. “It’s like part of our home, not like a cold showroom. People have the privacy to walk around in a nice, relaxed environment and see all the different types of cars under one roof. That’s unusual. If you go to most other showrooms, you will normally just see the one make.”

Whatever combination of service, reputation and location it is that sways the customers, the formula is working well. Last year they turned over approximately £150 million; and this year they are expecting that figure to rise. Like his father, Tom rarely takes what he would consider time off. The dealership is not so much a job as a lifestyle .

They are always busy. That said, he does enjoy golf, as do his father and his brother Carl. Yet even when they take a few hours to play golf together, their three mobiles stay switched on.

Carl Hartley also joined the business at an early age and is now a full partner. He not only has knowledge of the industry passed from his father, but also from his brother, Tom.

The three men now run the showroom and, together, they have a reputation both nationally and internationally for being able to supply the ‘unobtainable’ and all other sought-after specialist cars.

Aside from golf, another area of common ground is their liking for good quality personal number plates. “I have TH 4, my dad has TH 2 and my brother, Carl, has C4 RLS,” says Tom. Clearly the Hartleys’ registrations have to be of a calibre to suit the cars they drive. “I do like the plates. It’s like a treat for yourself, a bit like buying yourself a nice watch but this is totally unique, with only one of each. It’s almost like a form of identification.”

Different people phrase it in different ways, but the sentiment is consistent among so many of the people with whom we speak. An expensive car seems to cry out for a good cherished registration. No-one buys a £200,000 luxury performance car in the hope of fading blandly into the background. A purchase like that is made by someone confident and probably, to an extent, extrovert. If one is aiming to impress, then it makes sense to go all out. Half measures don’t convince.

Both Tom Hartleys have spent their professional lives, so far, surrounded by the most coveted of vehicles. They can pretty much take them for granted (although we suspect they don’t), but they still appreciate the finishing touch added by a well-chosen registration.

Tom Jr tells us that they also appreciate good quality service from their suppliers. “We like dealing with Regtransfers.co.uk because, as a company, you are like us.