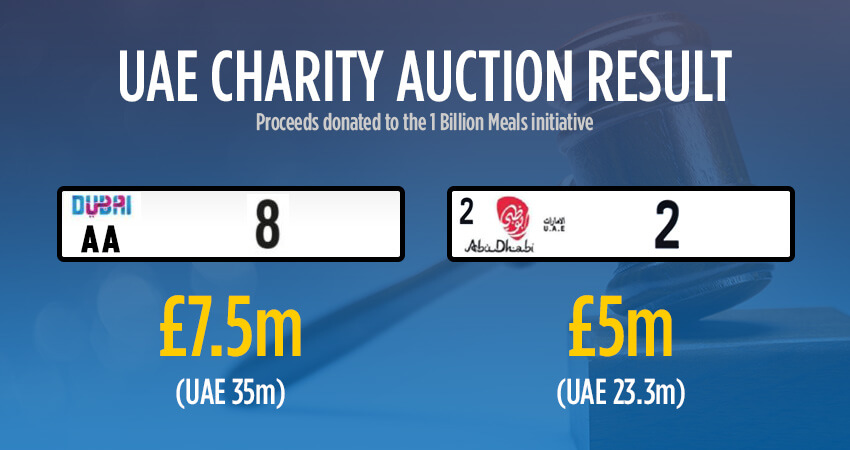 Just as the UK market has remained buoyant despite the challenges that have faced Britain and the world in the last couple of years, overseas sales have remained plentiful and, at times, spectacular.

April 2022 saw two new entries into the top 10 of the world's priciest plates, when the Dubai number AA 8 and the Abu Dhabi number 2 achieved £7.5 million and £5 million respectively at charity auctions in the United Arab Emirates. AA 8 came within a whisker of taking the top spot, which is still occupied by the 2021 sale of AA 9 at £7.6 million. But then, the UAE is a pretty wealthy neighbourhood...

As well as providing plenty of headlines, the April 2022 UAE auctions raised a colossal amount of money for charity. The events, entitled 'Most Noble Numbers', both donated proceeds to the 1 Billion Meals campaign, which aims to distribute food to vulnerable communities in more than 50 countries worldwide.

Plate cherishers of the world unite!

As we all know, private plates are very popular here in the UK, and becoming more so. Their sale sustains a respectably sized business sector and provides welcome employment for many - over 100 people at Regtransfers alone.

The UAE has hit headlines many times for extravagant auction performances like those mentioned above, and most people are probably familiar with the term 'vanity plates' that is used to refer to the American version of private registrations. For the record, we really don't like that term: it's pejorative and shows no understanding of the many reasons people have for personalising their cars. Each country has its own system and in larger countries, such as the USA and Australia, each constituent state may have different plates.

But despite the wide variations in the way jurisdictions administer their vehicle tracking and licensing, quite a few countries have found ways to allow their citizens to own private number plates - generating handy revenue for the state or for charity in the process.

In addition to this and previous reports of big sales in the UAE, we have also run news items about spectacular prices paid by people in Hong Kong and Australia. Wherever private plates are permitted they are met with a great deal of enthusiasm and even fanaticism. On one occasion we had to report that feeling ran so high at an overseas auction that a physical altercation broke out. Fortunately, auctions in the UK have been rather more dignified. So far.

Enthusiasm for private registrations doesn't just heat tempers at auctions, it also moves people to part with huge sums for the most coveted numbers. To date, the world's most expensive number plates have been bought overseas, making most of our domestic record breakers seem a little modest.

Privacy laws mean that we have to be careful about divulging details of some plates but the most expensive UK sale we can identify, the £518,480 paid by John Collins for 25 O, just manages to come in at number 32 on our chart of the world's most expensive plates.

We are aware of UK personal registrations that have changed hands for in excess of £1 million each but we are not at liberty to divulge details. Suffice it to say that even those most impressive UK prices wouldn't have reached the top 20 in our world rankings, even if we were allowed to identify them.

The top 14 places are all occupied by sales in Abu Dhabi and Dubai in the UAE. Number 15 is the first Hong Kong sale to make the rankings but from that point it's a bit of a contest between Hong Kong and UAE. The only other country to show up above the UK is Australia: the New South Wales number 4 achieved the equivalent of £1.5 million when it sold in 2017.

So, the love of personal plates is not defined by borders. Nevertheless, we'd love to see a few more UK sales taking some of those top chart slots!