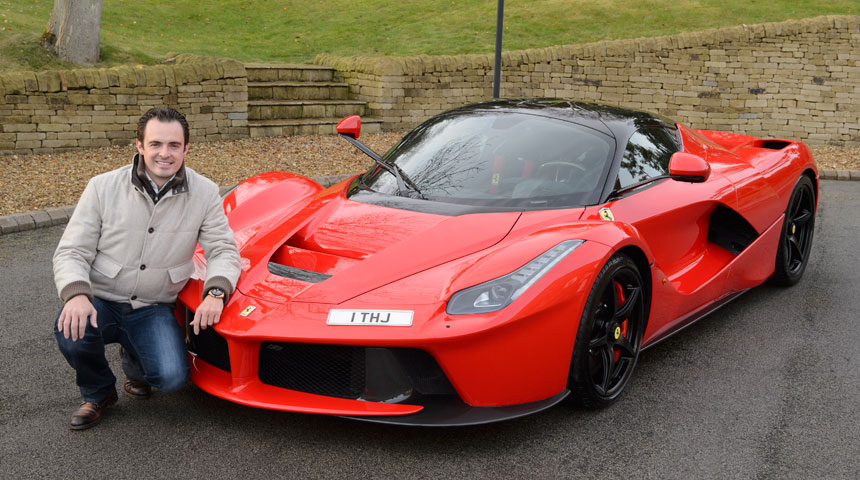 The name Tom Hartley is well known in the automotive industry and to fans of luxury and performance cars. It is also very familiar to regular readers of The World of Personal Number Plates: in issue 15 of the magazine, we featured the Hartley family business. At that time, we reported the vital role played by Tom Hartley Jnr in the development of the business. It was obvious then that the elder Hartley son was invested with a drive and focus similar to that which had made his father so successful.

Tom Hartley Jnr’s decision to leave the family firm in 2014 to launch his own exclusive supercar dealership will have surprised many who had been in awe of the combined talents of Toms Snr and Jnr and younger son Carl. Other commentators considered Tom Hartley Jnr’s amicable departure to be inevitable. The simple fact was that he had his own vision that he could only fully pursue independently. Tom Snr has subsequently expressed his pride in the achievements of both sons (Carl now runs the original family business with his father). Upon Tom Jnr’s departure, his father tweeted to wish him well, adding the hashtag #unique&amazingbusinessman.

“I left school at 11 years old to work in my father’s car business,” Tom Hartley Jnr says. “This was, maybe, an early apprenticeship but the best foundation I could have ever asked for and for which I’m very grateful to my parents. I worked every day and by the time I was 16 I had a 50% share in the business. The business grew each year but after 20 years of being involved I wanted a fresh challenge: a car business that purely concentrated on the greatest cars in the world, not just highly sought-after sports cars.”

The new venture hasn’t dragged its heels. 2016 turnover was in excess of £100m and the company has purchased a 15,000 square-foot premises where its stock of elite supercars will be displayed in a manner that Tom describes as “museum-like”. When one considers the rarity of some of the vehicles concerned, presenting them in any other manner becomes almost unthinkable. To illustrate the point, one of Tom Hartley Jnr’s standout sales of 2016 was a 1968 Ferrari 275 NART Spyder: one of only 10 ever built.

“In addition to buying and selling great examples, we are one of the very few dealers worldwide who will buy cars for inventory and will then, when required, carry out a two-year restoration before offering them for sale,” says Tom. “At any one time we will have £7m to £10m of cars in restoration. Obviously, this ties up a lot of cash flow but the experience gained by going through the process is very beneficial and seeing the transformation is very satisfying.”

Enthusiasm and excitement play as big a role as satisfaction in powering the Hartley enterprise forward. “I work every hour I’m awake. I’m very driven and addicted to business. I think a lot of this drive comes from the fact that I love the cars I deal in. I love the stories classic cars can tell, the people they have seen, the places they have been. A classic car is a tapestry into which threads of history have been woven. I once bought a very special Ferrari that most Ferrari historians didn’t know existed. In fact, the find caused Ferrari to call a committee meeting to discuss the car. This was a very important vehicle that had been tucked away under the same ownership for 50 years. It felt like a real coup to be the man who prised it free and reintroduced it to the world.

“My own favourite car is a McLaren F1 but the most important car I’ve sold to date was a very special Ferrari 250 TR, a car with exceptional history and the only unrestored example left in existence. It was the most expensive car in the world when I sold it in 2013.”

As a businessman, Tom naturally has an eye on the financial bottom line but he doesn’t measure his success solely by the impressive figures on a balance sheet: “I love doing deals. The profit is nice but it’s not what really motivates me. I like doing deals that others can’t.” And when asked to summarise the biggest achievement of his life and career to date? “To marry the right woman and to have the two greatest kids I could have ever wished for. My daughter, Olivia, is super bright and I know that she will be very successful at whatever she may choose to do. My son, Tom, recently said to me out of the blue, ‘I want to sell cars with you when I get older, Dad.’ I remember saying a similar thing to my dad. I used to watch him speak with clients and absorb everything I could from him, which has served me well. I hope I can pass on something like that to my son. It would give me great pleasure to see him be successful in the same business. My kids make me proud every single day and I’m delighted to say that my wife, Charlene, is expecting another baby in June.”

Tom loves the lifestyle that comes with his work. “One of the great perks of the business I’m in is the people I get to meet and the places I go while visiting clients and participating in some of the great car events. In 2017 I’ll be visiting Villa d’Este for the annual concours in May, Pebble Beach for the concours and car auctions in August and then Hampton Court for the exclusive concours in the Royal Household in September, to name just a few.”

Tom Hartley Jnr is a great ambassador for private car registrations. Like many of the other top business people we speak to, Tom considers a cherished number plate to be as serious an investment as it is an enjoyable finishing touch to a fine car.

“Registrations complete cars. A great car looks so much better with a good registration but I only keep plates that mean something to me; otherwise, as Regtransfers will testify, I’m happy to sell when a good offer comes along.

“At the moment I have TH 4, as I am the fourth Tom Hartley in a row. I also have 1 THJ, which I bought for my son when he was born. I bought that through Regtransfers, of course! Over the years I’ve had other great plates including: G 1, X 1, E 1, 5 G, 6 G and GG 1. I also like to buy car-related plates: recently I bought 250 TDF, the ultimate plate for a Ferrari 250 Tour de France.

“My plate purchases are split into three categories: there are the personal plates, which will never be for sale; there are plates that are car-related, which I’ll sometimes pair with the cars; then there are the great plates that I’ll speculate with, as I think the value of the very best plates will continue to grow.

“Regtransfers are the best. Over the years I’ve done deals with other plate dealers but, unfortunately, too often they’re opportunists who are looking to secure a sale and they inevitably let a client down. I see this in my own business with car brokers all the time and it frustrates me. People get an unrivalled service when dealing with my business and the product supplied is second to none. All my customers have to do is make their payment; we ensure that everything else is taken care of for them. They know the value I put on my reputation. If I say a deal is done, then it’s done!

“Once a client has experienced dealing with my business they won’t want to go elsewhere. That’s how I feel about Regtransfers.”