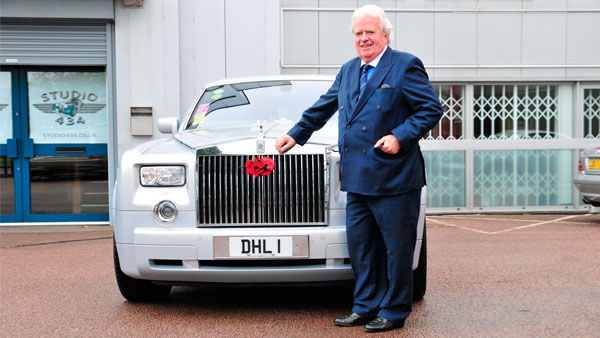 If we were to ask you to guess how millionaire Rodger Dudding made his fortune, we would be very surprised if you got it at the first attempt. Or the second attempt. Or at all. Forget your banking, construction, import/export, retail chains; Rodger’s riches came from rather more esoteric concerns.

As a young man Rodger trained as a mechanical engineer in the navy. A little later he had success developing queue management solutions such as the numbered ticket systems still seen at some supermarket delicatessen counters and the like. This innovation was inspired by a visit to Stockholm in Sweden where Rodger observed shop staff passing out numbered tags to waiting customers. While it seemed a simple and fair system, Rodger wasn’t convinced that the handing back and forth of plastic tags was the most hygienic approach. Disposable paper tickets were the solution, and a company named Lonsto was created to develop and market the product.

This alternative to actually standing in line was popular both with customers, who were freed from the British fear of the queue-jumper, and with the retailers because people were free to browse and pick up a few more products while they waited for their numbers to be called.

Rodger’s other notable venture has been in the field of lock-up garage rental, Dudwich Holdings Limited. At first, the idea didn’t really appeal but as it was suggested by someone whose judgement Rodger respected, he decided to go along with it, not really expecting to see a worthwhile return. He purchased a small block of garages in south London and, to his surprise, rental revenue began to trickle in regularly. Before long, Rodger began to consider that the only thing limiting the potential of this new business was its small scale. Next followed a phase during which he acquired as many lock-ups as he could find by getting landlords contact details from the garage tenants he would encounter while out reconnoitering, and then buying the garages from them.

The lock-up garage business has taught Rodger Dudding to expect the unexpected. He can tell tales of crime, suicide, illicit liaisons… All aspects of human behaviour, it seems, eventually unfold in the privacy of a lock-up garage.

Unusual though his businesses may have been, they have brought Rodger sufficient success that he is now the proud owner of his own private motor museum. In a striking space of some 30,000 sq ft, called Studio 434 (or, informally, “Rodger’s Toy Cupboard”) are more than 200 classic vehicles that Rodger has collected over the last 40 years. Although the collection has its commercial side, with chauffeured and wedding car hire, vehicle storage facilities and car/prop hire for movie and TV production, including everyone’s favourite, Downton Abbey, it is a labour of love and the result of a real passion for classic cars and motorcycles. Studio 434 also boasts a fully-equipped, professional photographic studio, and a cyclorama environment that enables photographers to take detailed images with a minimum of spurious reflections and shadows. For clients seeking an unusual and engaging environment for important events and functions, Studio 434 can host full silver service dinner parties amongst the stunning collection of vehicles.

As one might expect, Rodger has also acquired many top quality personal registrations, including DHL 1 on a Rolls-Royce Phantom, 2 DHL on an Aston Martin Lagonda, 3 DHL on a Range Rover and many more.

Rodger would like to expand his classic vehicle collection, which he likens to a collection of artworks. He would also consider opening the museum to public viewing, but finding suitable premises continues to be a challenge. Nevertheless, Rodger continues to talk to the local authority with a view to securing an appropriate location for development.