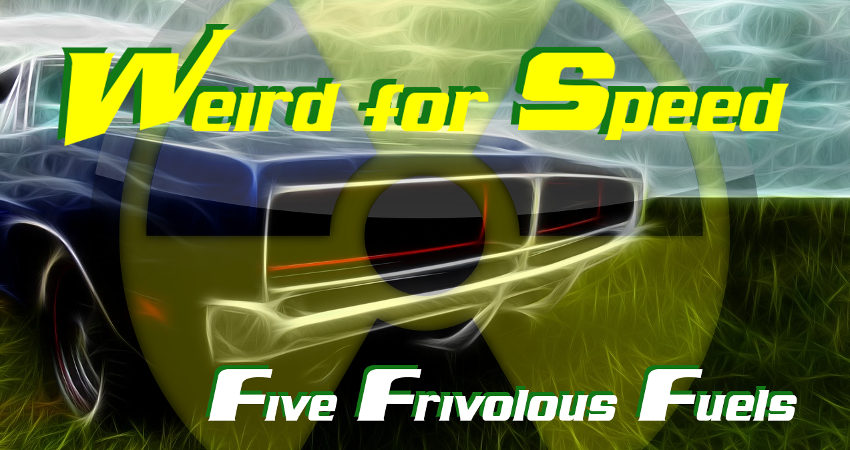 In the race to develop alternative fuel sources, inventors and engineers have explored some weird and wacky avenues. Here are five of our favourite unconventional fuels that have powered, or were planned to power, cars on the road.

With the ancestors of the motor car appearing at the height of the Age of Steam, we shouldn't be surprised that some used steam to power them. In fact, right up until the appearance of Henry Ford and his Model T, steam-powered cars were on the road, sold as a luxury way to putter past the common folk.

The appearance of the petrol engine doomed the steam car for two reasons. First, there was the annoying habit of having to wait around for the boiler to heat up. Second, the costs of manufacturing a petrol car ended up much, much lower than their steam counterparts.

That's not to say the steam-powered car is completely dead, however. While they are mostly consigned to the classic car shows, occasionally someone attempts to build a steam car for the modern age.

Teams in the UK, Germany and the United States have been using a century's worth of technological advances to create an engine with the same power as the standard combustion version, that can also be safely be installed into the average car chassis – and trying to beat land speed records while they're at it, such as the British Steam Car Team did in August, 2009 (Reaching a scorching 139.84mph!)

It sounds like a rather grim joke, or something out of the 'Fallout' series of video games, but a nuclear-powered car was once on the drawing board. The Ford Nucleon was a concept dreamed up in 1957, in the hopes that nuclear engines could one day be made so small as to fit under a car hood. This was in the golden age of atomic energy, when it was thought uranium would produce clean, limitless energy forever – good for them!

The Nucleon was shelved as the sixties dawned and the spectre of nuclear holocaust loomed. Nuclear power and the destructive power of nuclear warheads became inextricably linked. Understandably, the idea of a nuclear-powered car began to inspire terror in the hearts of many.

That's not to say that the nuclear car may not reappear one day. Various groups such as the US-based 'Laser Power Systems' claim to be working on a vehicle that uses thorium instead of uranium to power a small turbine. Various promotional materials claim that such a car could run for a century on only a few grams of the stuff, but there are many sceptics shooting holes in their spiel.

One thing is for sure – you'd never have problems warming the car up on a cold winter’s morning!

Faeces - The Fast and the Poo-rious!

There's lot of it around, so why not use it? Faecal matter – both human and animal – has been suggested as a possible fuel for a car for many years. This is because as the stuff decomposes, it gives off methane from which gases such as hydrogen can be extracted.

Over the last decade, special fuel cell vehicles (FCVs) in Australia and the United Kingdom have been hyped-up as 'poo-powered', running exclusively on hydrogen sourced from human waste at sewage treatment plants. Passengers landing at Bristol airport can even catch a 'Poo Bus' to Bath, if they can stomach the name.

If you were wondering, there's no need to worry about the smell. - as these FCVs are almost entirely electric, so there's no smell and the only output from the back end is water vapour.

We will see more of these 'poo powered' FCVs in future as countries attempt to deal with growing populations and the subsequent waste, so who knows – one day when you call your motor a piece of crap, you may be telling the truth!

Back in 2009 the University of Warwick created the world's first sustainable F1 car, with parts made of recycled carrots and potato starch. It could reach a respectable 125mph, powered by a rather tasty fuel – developed almost completely from chocolate!

Now, before you go trying to shove a Mars Bar into the fuel tank, the chocolate is heavily treated and processed to become a biofuel, so there's no chance that a Twix will get you to the shops and back.

The project does show, however, that biofuels have moved beyond the concept stage and to a place where they can power high-performance vehicles. All we can say is, if fuel made from chocolate can drive us this fast, we're willing to forgo the odd cheeky Snickers.

You're not going to go any great distance with it, and you're not going to have room for the kids, but if you're an urban sort looking for a ride, air-powered cars might be the choice for you over the coming years.

French company Motor Development International has recently developed the Airpod – a two-seater, running on compressed air, that will get you 120km between refuelling (from a standard garage pump) and that has a top speed of 80kph.

The sleek new car is being marketed as 'disruptive' to the gridlock paralysing many cities and a cost effective choice (retailing for about £8,000) for city-slickers who are sick and tired of paying for Ubers across town.

It looks to be the singular hope for compressed-air cars, after India's Tata Motors have failed to deliver on their promises for a similar model over the last few years - possibly so much hot air?

Have you heard of a similarly weird fuel source for cars? Let us know! We may feature the best on our social channels.