Inspired by victory on a plate! 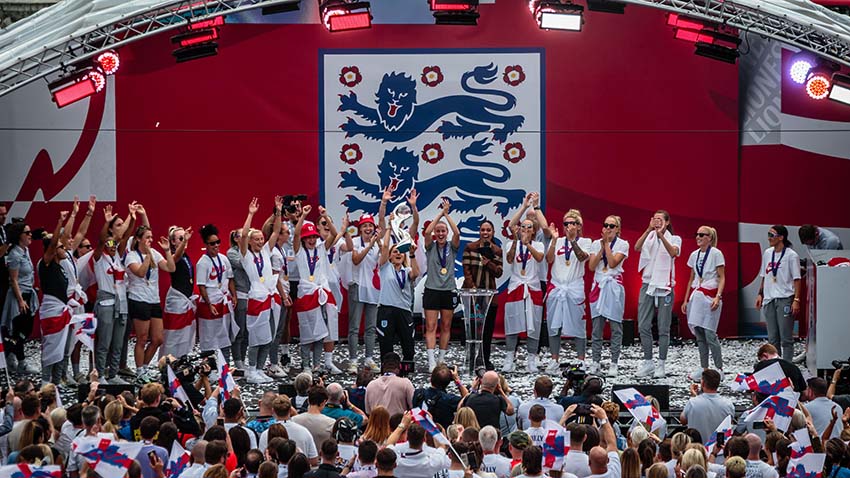 Well, the trophy isn't actually a plate: it's not even a cup. No, the Euro 2022 trophy is a wonderful squiggly thing with a blob at the top. It is very nice and it is, finally, ours!

The England women's team, AKA the Lionesses, have achieved amazing things over the last few weeks. Those weeks have been filled with genuine effort, excitement, enthusiasm, entertainment, excellence and many other things - some not even beginning with 'e'. It almost seemed as if the only things lacking in their story, their performance and the coverage have been the negatives. Even notoriously miserable football-sceptics like your humble blogger found themselves succumbing to the Lioness Effect, and thus completely unable to muster their usual resentment of the sport.

Credit where it is overdue

At this point, I'm afraid I am going to mention the England men's team but only to emphasise that the women's team has delivered what the guys couldn't. There now seems to be no defensible or sensible reason that the women's game should not be considered the equal of the men's in every way and one would naturally expect that pay, recognition and status within the sport will reflect that. In fact, everyone who enjoyed the tournament should insist on it.

As I've confessed, I am not a lover of football: far from it. Very far from it indeed. In fact, about as far from it as you could get. You get the idea. That said, even I appreciated the elegance of Kiera Walsh's pass and Ella Toones' chip as they secured England's first goal, and Chloe Kelly's thoroughness in sending home a ball that a less determined player may have given up on, thus effectively assuring the win.

The word 'inspirational' has been used a lot and we feel a little inspired ourselves. You really wouldn't want to see the Regtransfers marketing department playing football - even those colleagues who are young enough to safely do so - so we won't form a team of our own. Instead, we will stick to what we know and celebrate the team who brought football home to us. Here are a few themed number plates that we hope will serve as our tribute to the Lionesses and their achievement.