Number Plate Investments? You Could Do Worse! 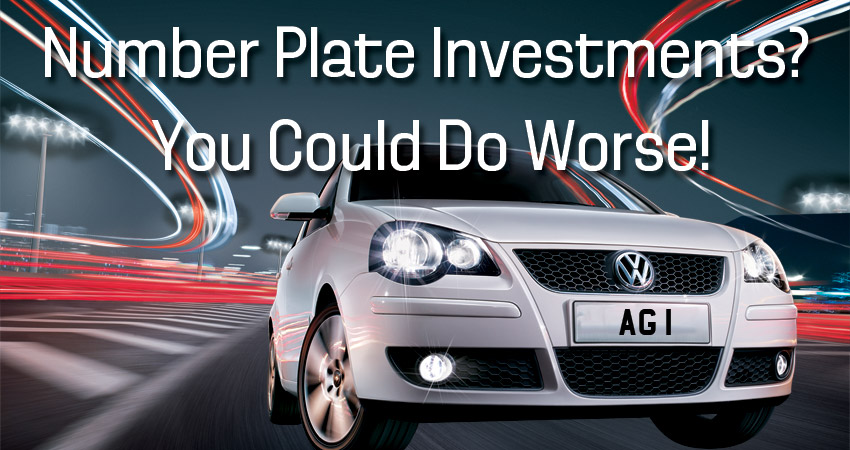 Many of us love to daydream about life on our own private island while our money does the hard work. Over the years, investment markets have come and go, each capitalizing on our desire for a quick return on our outlay. However, buyer beware - history, right up to the present day, shows us that for every investment windfall, there are many more losses.

We’ve picked four of the most notable investment failures to have a look at, as well as one we think is a wise choice - can you guess what we’ve picked?

Whenever anybody mentions poor investments, inevitably the conversation will turn to tulips, and for good reason - the spectacular rise and fall in their value in mid-17th century Holland is the stuff of legend.

You see, as the Dutch opened up the world via shipping, exotic, brightly-coloured flowers like tulips were brought back from places such as Turkey. They soon became a status symbol, even depicted in paintings, porcelain and other artistic mediums. Prices for tulip bulbs rocketed and speculators ran rampant in cities such as Amsterdam and Utrecht. This rush was propelled to even greater heights by varieties of tulip that displayed wild swirls of colours.

Paradoxically, it was this wild colouring that was to lead to the crash in the bulb boom. Such tulips carried the ‘Mosaic’, or Tulip Breaking Virus. One side-effect of this virus was the spectacular colouring. Another was leaves and flowers that withered much more quickly than normal tulips, unfortunately.

In the winter of 1637, people began balking at the amount they were expected to pay for what would all too soon be compost, and the bottom fell out of the market. While most financially grounded merchants and aristocrats managed to hold onto their money, many of the speculators and amateur investors lost it all and found themselves on the streets.

Funnily enough, those paintings of tulips I mentioned before? Over time they became very, very valuable - artists such as Rembrandt and the Brueghels were hired to paint them.

The Dutch tulip boom is a classic example of ignorance and blind enthusiasm leading to significant losses. Nobody understood the risks and mechanisms that underpinned investing in a natural resource. Some have suggested that the experience led to the Dutch reputation for frugality- they won’t be fooled again!

Art has always been a risky investment proposition. Tastes change over time, of course, and it can be quite difficult to verify a piece’s provenance. Just as there is a big market for paintings by famous artists, so there is for forgers. Art theft is also a big problem, with several large agencies devoted to working out who artworks should rightfully belong to.

The art market in the United States faced a new problem in the late nineties. Thomas Kinkade, a painter, had become famous for his ‘paintings of light’ that showed homespun scenes of American life, usually involving a warm glow emanating from cosy cottages.

Kinkade became so enamoured by the success of his paintings that he not only began to license the works to appear on various merchandise, but opened several galleries across the country over the course of the 1990s.

Fairly soon, Thomas Kinkade’s work was everywhere you looked - and that was the problem. It was an easy target for mockery and prices collapsed as people offloaded their originals for less than they bought them for. Sales of licensed merchandise plummeted. Kinkade kept borrowing money to keep his galleries afloat, but in the end had to close most and pay out substantial amounts to staff. He died in 2012, reportedly angry and bitter.

Oversaturation of a market is often its death-knell to investors. If there’s too much of something, there’s simply no motivation to put your money on the table. Kinkade found that out the hard way, and so did many of his fans.

The US in the late nineties was also the stage of another bubble, this time focusing on the Beanie Babies range of plush toys manufactured by Ty Inc. There was nothing outwardly special about these cute and cuddly characters, other than the company’s canny decision of releasing them in limited edition series and withdrawing them after a short period of time.

Soon, parents weren’t the only ones grabbing them from the shelves. Collectors, keen for new investments, sought out specific Beanie Babies based on their perceived rarity or production mistakes. Some parents purchased several, hoping that it could pay for their children’s college education.

For a while, Beanie Babies did have a fairly good resale value. A few special toys changed hands for truly impressive amounts of money. However, cheap knock-offs and imitations begun to flood the market. Forgeries were also a problem, with a few high-profile raids on counterfeiting operations. Before long, the bad press and changing tastes meant that they were yesterday’s news.

You can still find the occasional (rare, mint-condition) Beanie Baby selling for a significant chunk of money, but 99% remain essentially worthless, despite efforts to store and care for them.

Can your investment be easily counterfeited? What’s stopping somebody for making something that looks just like it? Is it something likely to fall out of style in a crowded market? Those seeking to looking to invest in the Beanie Baby crazed needed to ask these questions before jumping in.

The most popular, Bitcoin, was invented by a shadowy figure called Satoshi Nakamoto around 2008. Over the last eight years it has become the foremost cryptocurrency and is now used for paying for all sorts of products. Consequently, it has sharply risen in value, with many early investors making out very well for having purchased a few bitcoin in the early days of the currency.

This year, however, has seen a crash in crypto-currencies, with many losing thousands of pounds of value in the space of a few hours. This could be a natural part of the investment cycle, with those early investors choosing to offload their coins, or it could be something much bigger. There are several issues with Bitcoin, including its widespread use on the ‘dark web’, that have made it problematic for large investors, such as banks. A rush to offload their investments could be the trigger for a manic phase of selling, reducing the currency’s value.

While fluctuating prices are essential to the very concept of investment, the volatility of new markets, such as that for crypto-currencies makes them a very risky proposition for smaller investors looking to dip their toe in.

How can something that looks like just a humble piece of plastic or metal be a smart place to put your money? On the surface, something attached to your car may seem a counterintuitive choice for an investment product. Yet the very nature of a private car registration means that they are ideal for those looking to make a bit of money over time.

Think about it - by sheer necessity, each number plate in the United Kingdom must be unique in order to identify who the car belongs to. Each plate is linked to a wealth of information. Security, therefore, around the supply and distribution of plates needs to be high - the Driver and Vehicle Licensing Agency (DVLA) makes sure of this.

Furthermore, people have a natural inclination to want to distinguish themselves, to stand out. When it comes to number plates, they may want to adorn their car with their name, or that of a loved one. They may want people to know exactly what kind of car they’re driving, or might simply want to be cheeky with something risque.

There are only so many combinations of letters and numbers. There are even fewer that spell out names or words. This creates demand, a market for certain number plates.

A number plate is an investment that will mostly be free of the dangers that plague other investments. They’re not a fad, there’s a controlled supply and there’s a degree of trust in that supply. The wise investor, with a little research, may find themselves tripling or quadrupling their original outlay. They key, as with most investments, is understanding the market.

Interested in learning more? We would love to talk to you about finding a great personalised number plate that is likely to appreciate in value over time. Why not give us a call today! *

* Of course, the value of investments can decrease as well as increase. There are no guarantees. This article is intended as information and food for thought, not as financial or investment advice.