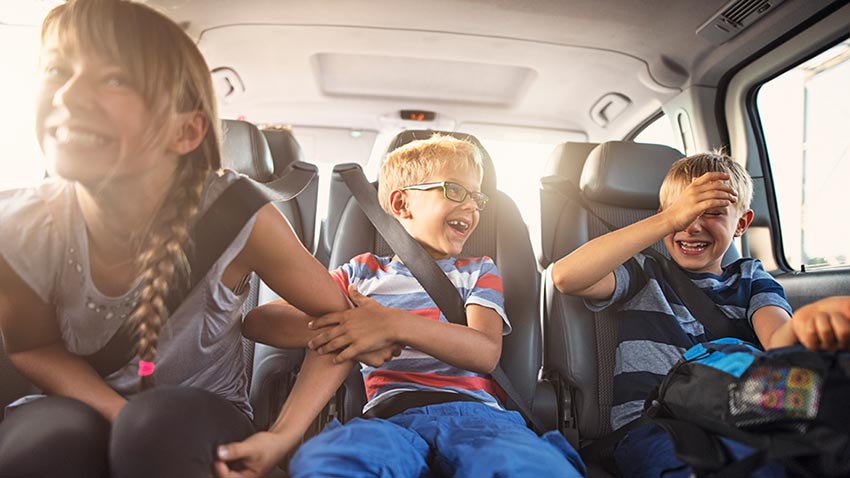 At last we are seeing a limited return to a hint of normality. Ghost towns are gradually showing signs of life and the roads are filling up with traffic again. For the first time in quite a while people are starting to travel away from home to visit family and even to have a bit of a holiday.

But every silver lining has a cloud, as the old saying nearly goes, and even a relaxing holiday can have its moments of tension. Do any of the following ring a bell?

"Did you lock the front door?"

"I don't remember turning off the gas cooker!"

"We didn't shut the cats in the living room, did we?"

"Was that your wallet on the worktop when we left?"

Sadly, we can't check the wallet, the front door, the gas or the cats for you but we may be able to help reduce the number of 'are-we-there-yets'. Here are a couple of time-consuming and moderately educational games for kids that may help, just a bit. A note pad and a pencil or two might be helpful things to have with you. Obviously, children should always wear their seat belts in accordance with the law, so make sure they stay securely in their seats.

The aim of the game is to spot as many of the letters of the alphabet as possible on the number plates of the cars you see and to tick them off on your bingo card. Make your bingo card by writing down the letters of the alphabet. If one person is playing then tick off the letters on your card as you see them on car number plates. Challenge yourself to spot as many as possible. If two people or more are playing then spotting can be a team effort with spotters calling out the letters as they see them and one person ticking them off on the card, or it can be a competition to see who spots all the letters first.

We suggest allowing zeros and ones to count as the letter O and I to avoid confusion and arguments. Some letters, such as Q, are very rare to see on number plates. These can either be excluded from the game, or if the kids are into it, just don't tell them and let them keep looking!

This is another spotting game.

The object of the game is to spot all the numbers from 9 down to 0 on car number plates. The challenge is to do it in order, so first the number 9 must be spotted and ticked off, then the number 8, then 7 etc. It is not allowed to tick off a number until you have reached it by spotting and ticking off all the higher numbers.

Make a countdown card by writing down the numbers from 9 down to 0. Tick them off in order as they are spotted on number plates.

If one player is playing then the game is a simple spotting challenge. If there are two or more players then the game can either be a team effort with players calling out the numbers as they are spotted and one ticking them off, or a competition to see who can complete the countdown in the correct order quickest.

Everyone knows this classic game but it still works.

Whoever guesses correctly takes the next turn to pick an object. The only real rule is that the object must be something that was visible at the time that the "I spy…" was called out.

This one requires a bit of preparation as you have to make a list of things to be spotted. The good news is that the preparation can be made part of the game.

You can either write the list before setting out or get the players to nominate things to go on the list and make it part of the game.

Again, this can be a team effort with everyone working together to spot things, or each player can have a copy of the list and it can be a competition.

Another classic game that most people will know.

For example, the active player may think of a table. The other players may ask things such as;

The last guess obviously wins as it was correct.

Not a game, more of a desperate last resort.

It goes something like, "Whoever can go a whole hour without speaking, whinging or fighting wins £5."

A small price to pay for a whole hour free from, "Are we there yet?"

You may come across a plate you think looks extremely valuable. You could compare it to our UK exclusive list of most expensive number plates.