The most dangerous roads in Britain 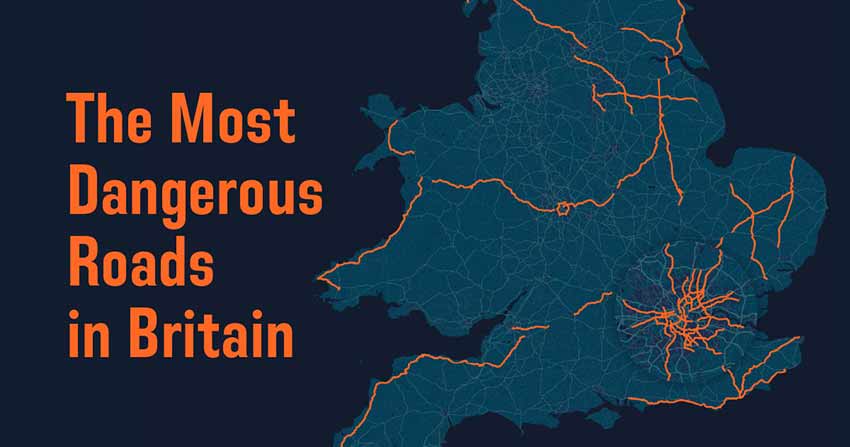 Britain's roads are seeing record rates of accidents and this has led to a five-year high. 1,792 deaths were recorded in road traffic accidents in 2017 - up 4 percent from 2016.

Some of the data tells us things we may already expect: for example, more than half (52%) of Britain's most dangerous roads run through London, with the highest accident rate being 12.70 per 1 million vehicle-miles driven on the A1010. These findings are backed by figures from the Department for Transport, which states that London's busy roads rank three times more dangerous than country routes.

The top 10 most dangerous roads in Britain are:

But if you don't live in (or near to) London, you may be wondering what other roads have a high accident rate. So, we took on some further research to find out the most dangerous road in every region.

The most dangerous roads in each region are:

With the A49 having an accident rate of 26.12, over double the amount than the road ranking second, it is important to raise awareness of the danger of this road and hopefully attempt to reduce the rate.

In order to create this unique data set, we divided the number of accidents by the amount of traffic on that road. This revealed that the busiest roads that typically come out on top aren't actually the most dangerous.

The data is based on accidents and traffic volume that spans 10 years between 2007-2016 and the roads that have seen at least 1,000 accidents.

That's a lot of accidents, so by raising awareness of this issue, we can hopefully expect to see people driving safer and being more aware of dangerous roads - especially throughout the winter months.

Our interactive map shows the roads location in Britain, and the accident rate per 1 million vehicle-miles driven. Take a look at The Most Dangerous Roads in Britain and help raise awareness.