On Tuesday 22nd November, the Regtransfers team settled down in their respective homes (no, we don't all house-share) and switched on their TVs. Those of us with a sense of humour flipped over to the Dave channel in time for Dave Gorman's Modern Life is Goodish. How Gorman got them to name a channel after him is beyond us. Anyway, for those who may not have seen the show, Dave Gorman's differs from most stand-up comedy shows in the same way that Strictly differs from most (allegedly) talent-based reality shows - namely in that considerable preparatory work actually goes into the programme. In the case of Gorman's show, his trademark format is the use of a big screen upon which he projects the PowerPoint-style presentation that is his prop: an approach that has worked for him since his first TV series, The Dave Gorman Collection and probably before that. 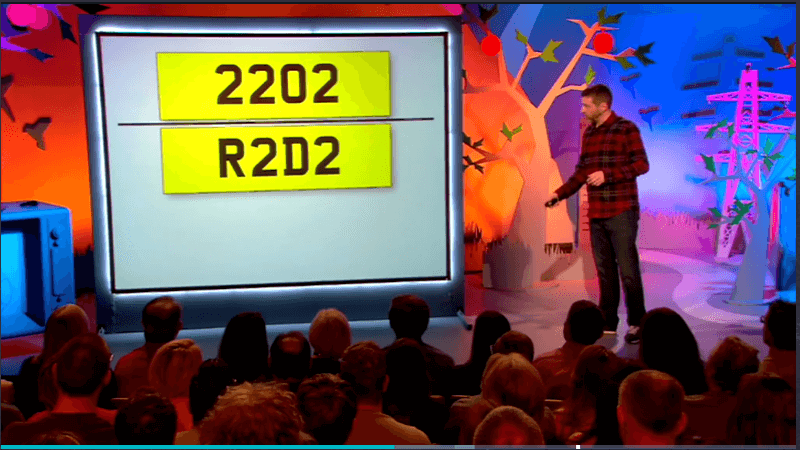 So, there we all sat. The first section of the show was great, lulled us into a false sense of comfort. Then, out of nowhere, Dave Gorman insulted people who own personal number plates - including us and members of his own audience. As if that weren't bad enough, his audience laughed. As if that weren't bad enough we laughed. Gorman mocked personal plates. He made them into a game that took the mickey out of number plates and out of Brucie's Play Your Cards Right. We didn't bat an eyelid when Dave had a laugh at Kanye West's expense - after all, if Snoop does it then it's cool - but to mock number plates, and to take the name of Regtransfers.co.uk in vain? That's going too far.

We should have been miffed. We tried to be angry. We tried to build up a good head of outrage so we could complain to Dave (the channel and the comedian), but have you ever tried to make an irate phone call while you're laughing? It ruins the effect and your complaint loses all credibility.

Ah well, you know what they say: if you can't laugh at yourself, Dave Gorman will get everyone else to do it for you.

Dave Gorman's Modern Life is Goodish goes out on Dave at various times. See uktv.co.uk for details or follow @DaveGorman on Twitter.