Lucky Numbers have had specific meanings in many cultures, but none more so than in China. There, numerals have very distinct meanings, leading to some being highly prized, others totally shunned.

As we approach Chinese New Year (Friday, 16 February) we thought we’d share some of what we’ve learned about Lucky Chinese numerology in our years of trading and selling private number plates.

In both Cantonese and Mandarin, four is pronounced like ‘si’, or ‘death’. Understandably, people like to avoid such connotations and it has, in fact, much the same reputation as 13 does in the English-speaking world.

Businesses will go to extreme lengths to avoid the numeral in their address or telephone numbers. Hotels and high rises will also omit 4 in floor and flat numbers.

Not only is there the folk belief in China that good things come in pairs, ‘2’ also sounds like ‘easy’ in Cantonese, and when people believe that when paired with other ‘lucky’ numbers, it ‘smooths the way’, so to speak.

6 sounds like ‘liú’ or ‘flow’ in Cantonese and Mandarin, and is seen as lucky in the sense that, like ‘2’, it makes for smooth sailing and a trouble-free future.

8 pronounced in both Cantonese and Mandarin, sounds like ‘fa’ or ‘to prosper’.

For hundreds of years, 9 was associated with the Emperor, who was supposed to rule under the will of the gods, or the ‘mandate of heaven’. Thus, 9 was a considered a prestigious number, and one that represented stability and order.

‘9’ also sounds like ‘forever’ or ‘eternity’ in Mandarin, making it a favorite number to be used around weddings.

Double (or triple) or nothing.

In Chinese numerology, the significance of a number is magnified when it is repeated - for example, ‘88’ is taken to mean ‘double happiness’ or ‘double prosperity’. The more of the same auspicious number, the greater the luck.

Our collection of number plates has potentially thousands of combinations of lucky numbers if you believe as many Chinese people do. What can you find? Share them with us and we will feature some of the luckiest! 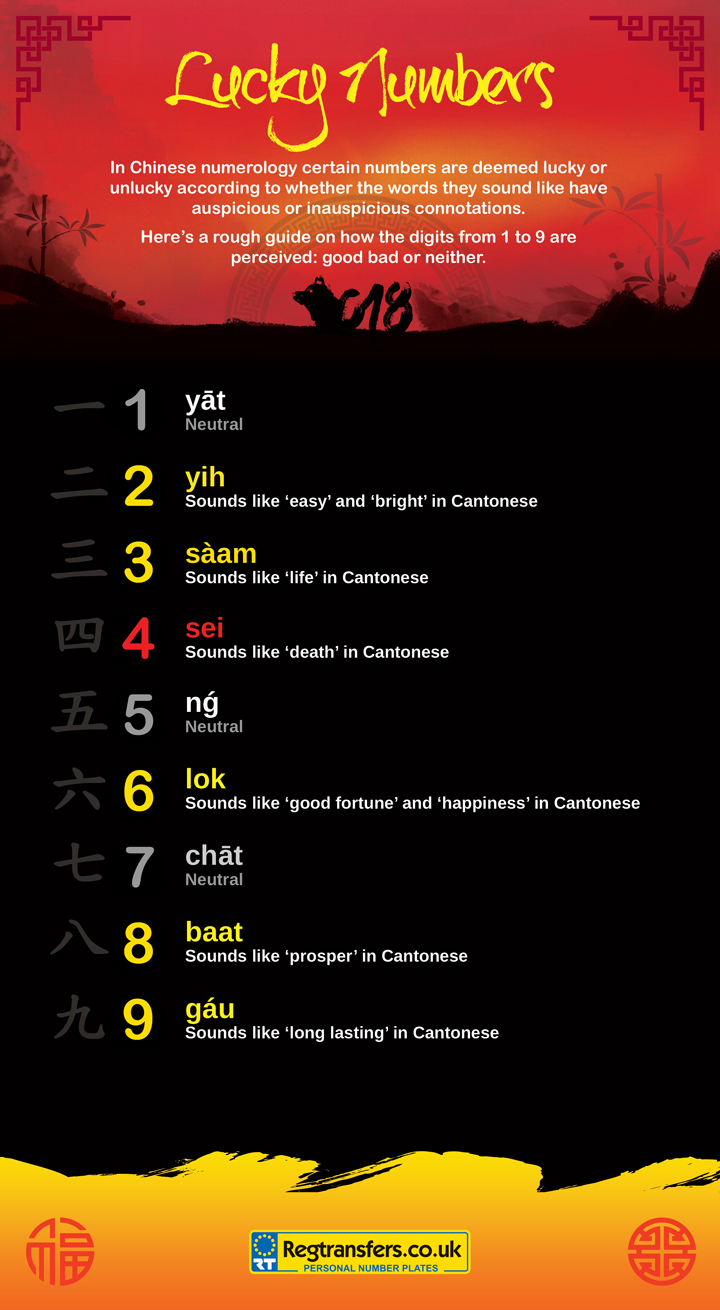