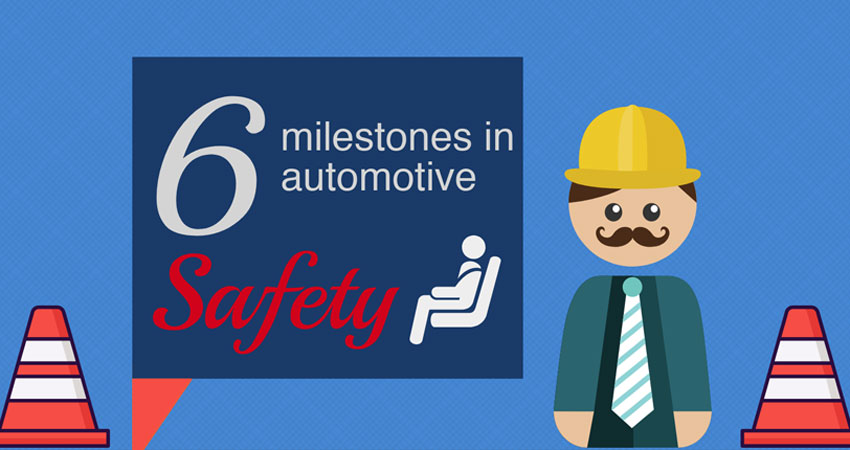 When you think about it, driving a several-tonne lump of metal, rubber and plastic does pose a number of risks. Humans aren’t perfect creatures, especially when it comes to paying attention to the road, and as long as there have been cars there have been accidents. Thankfully, both car manufacturers and government have worked over several decades to make driving a safer, less risky experience - with dramatic results.

Today, we’ve put together six of the most important milestones in automotive safety, to help you better understand the hard graft that has gone into getting you where you need to go.

Unless you wish to be at blinded by wind, dust or rain, a windscreen is a driving essential. Windscreens were a feature of almost all motor vehicles from the very beginning of the motoring age. Unfortunately, many of them used normal window glass, with rather gruesome results. Even relatively mild collisions could cause them to smash, sending shards of glass flying everywhere - usually into soft, squishy drivers.

A British man, John Crewe Wood, was the first to patent what we know as windscreen glass in 1907. It used glass sandwiched between sheets of turpentine resin, that would crack and slowly splinter, rather than smash. When Henry Ford opted to use this kind of glass in 1927 for his Model T Ford, the standard was set and almost all cars going forward used this technology.

As time progressed, technology meant that safety glass - glass designed to break into small granules when struck - also made its way into many vehicles. This is why, on many buses, you can find small hammers, designed to break the windows open in an emergency.

Careening down roads (some bumpy and poorly paved) carried high risks for the first drivers. It didn’t take much of a head of speed to throw someone from an open-top car (or worse, through a window) leading to significant fatalities. Therefore, seatbelts were also among the first of safety measures designed for cars - they were worn across the lap like a belt.

These early seatbelts proved to save lives, but doctors working with crash victims noted that many endured nasty abdominal industries as a result of being squeezed like a sausage across the waist in a collision. More could be done.

In 1957, an engineer for Volvo, Nils Bohlin gave us the three-point seatbelt that we know today. A waist strap and a strap diagonally across the chest helped hold both the abdomen and upper torso back in the case of an accident. The number of injuries incurred in car crashes fell dramatically. The seatbelt retractor, introduced in the sixties, was even more effective at keeping drivers in their seat during an accident tightening at impact.

Seatbelts are required by law in many countries and it is calculated that Nil Bohlin’s design has saved millions of lives in the fifty years since it was introduced. Still, governments are still moved to encourage drivers to belt up with media campaigns, often depicting the tragic consequences of failing to do so.

It’s a little counterintuitive - building a car with sections designed to crumple in a collision - but it is another innovation that has saved countless lives.

Early motor cars were built with rigid, reinforced chassis. The thinking was, the more structurally sound a body, the less chance of drivers being killed or injured in a crash. However, this did not take into consideration the incredible forces of momentum generated during accidents, throwing drivers about within the body of a car - imagine vigorously shaking a single mushy pea in a can. These solid-body vehicles were killing drivers.

Enter Austrian engineer Béla Barényi, who came up with the idea of crumple zones in 1937. His front and back sections of the car chassis were designed to crumble in on themselves in the event of an accident, dramatically reducing the forces of generated inside the passenger compartment. Once he joined the team at Mercedes Benz in the fifties, he refined the concept and, for a while, their vehicles were amongst the safest in the world. This wasn’t his only safety revolution - he also introduced the collapsible steering column and a safer central passenger compartment that wouldn’t deform under impact.

Crumple zones today use clever design, refined over thousands of hours of observations, to direct how a car crumples on impact. High-tech metal alloys and plastics have also been developed to ensure predictable, safe deformation of cars in accidents.

Even with the development of crumple zones, collisions were still responsible for many injuries, caused by sudden loss of momentum.

It took an American having a near-miss with a boulder in the road, back in the 1950s, to come up with a solution that would further cut into the numbers of those hurt. John W. Hetrick, shaken by his close call, drew on his years in the Navy as an industrial engineer to come up with a solution. He remembered using compressed air while repairing torpedoes, and how a canister had accidentally (and very suddenly) inflated a canvas sheet covering it. Soon Hetrick had developed a working prototype using a sensor, compressed air and a small bag, However, it wasn’t until the 1970s that airbags appeared in a consumer vehicle for the first time - the Oldsmobile Tornado. Soon it became a standard offer in nearly all makes of cars.

Despite some issues with children - the sudden force of an airbag inflating can be harmful or possibly even fatal to them - the airbag is now widely accepted as a safety feature in cars. Side-inflating airbags have also been developed, to protect passengers in a t-bone collision. Replacing and resetting airbags has become something that can be carried out at almost all service centres and lives continue to be saved.

Once upon a time, if you had to brake suddenly on a wet, icy or muddy road, chances were you would completely lose control of your vehicle and go into a skid. There was simply no way to release brake pressure without potentially careening into whatever you were trying to avoid.

Enter the Anti-lock Braking System (ABS). Originally introduced to protect aircraft on carriers (a rather substantial investment), ABS system came to cars in the 1970s, the first car to feature it being the Mercedes-Benz W116. The technology works when sensors detect a skid. Having done so, the brake hydraulics ease slightly, recalibrating and checking for traction every couple of microseconds until completely restored. By implementing computer technology, the car is handed reaction times faster than any human could possibly have.

ABS technology has been refined over time, further improving the ability of cars to avoid skids by implementing more sensors and faster processors. While icy roads and wet weather is still cause for concern for many drivers, far less people are coming a cropper in such conditions.

You might seriously doubt the ability of a piece of yellow acrylic to stop accidents, but number plates were an important step on the road to motor safety.

Prior to the 1890s, cars across Europe were not required to display plates. This meant that if a car was involved in an accident, or was driving recklessly, there were many fewer ways to figure out who was responsible. The introduction of plates in France, Germany, then the United Kingdom meant that observers, police and other statutory bodies had means of recording and tracking poor or criminal driving.

Today, while you might not really have it in the forefront of your mind, number plates act as a kind of passive safety measure. We try to drive carefully, lest we have an accident and have to give our registration details. We know that if a speed camera catches us, we’ll have to pay a fine, based on our number plate being identified.

If you’re going to have a number plate, it might as well be one that is bold, brassy and makes a statement about you: a personalised one! We know just the people to help you obtain the perfect plate - just call 01582 967777!