Five Ways Autonomous Cars Will Drive You up the Wall 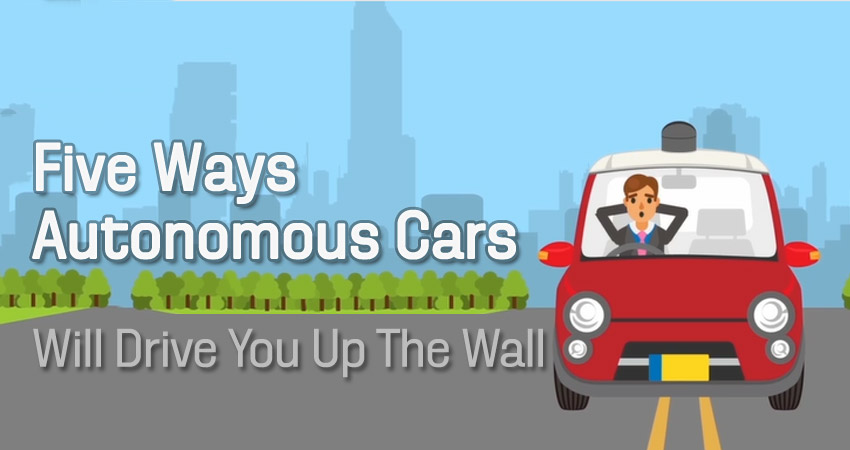 Just a few years ago, the idea of autonomous, or self-driving, cars seemed like a far off sci-fi dream. However, in light of the recent breakthroughs from Tesla, Uber, and Google, driverless vehicles may be coming to roads near you, and a lot faster than we had ever expected.

The world holds its breath as the motoring industry and technology giants race to develop vehicles with driverless capabilities and ultimately autonomous self-driving cars. By 2025, it is predicted that consumers will be able to buy a vehicle that can successfully navigate crossroads, traffic lights and roundabouts without drivers even having to touch the controls.

Roads may be safer

There were 182,560 reported road casualties in the UK in 2016. As 90% of traffic accidents are due to human error, autonomous vehicles have a huge potential for making traffic safer and saving lives.

Traffic and fuel efficiency may improve

Human drivers don’t use the space on the road efficiently. Automated and connected vehicles would be able to smoothly change lanes and drive closer together. Moreover, with automated acceleration and braking, fuel efficiency can be optimised, reducing carbon emissions.

We could have more free time

Instead of staring at the car in front, you’ll be able to make good use of your journey time, catching up on the football highlights or perhaps indulging in a well-deserved nap.

But even an automated ride may not go completely smoothly and we’re sure that there will be lots to complain about (especially if you’re a driving instructor). Here at Regtransfers, we’ve compiled a list of our favourite “first world problems” that autonomous vehicle users could encounter:

Autonomous traffic will seamlessly flow through the streets like a majestic pod of dolphins... Until that one old geezer with the only manual car remaining in the neighbourhood decides to pull out in front of you, sending all the automated vehicles swerving in all directions as they re-calculate their trajectories. As autonomous transport becomes the norm, the stigma of which technology is less safe is set to flip, framing manual drivers as the reckless road users in society. When autonomous cars conduct most journeys safely, perhaps manual drivers will be made to display a sign or special number plates to alert other road users to the potential dangers they pose!

Robots making moral choices
You would expect that a car belonging to you should always be on your side. But, as artificial intelligence becomes more sophisticated, your vehicle may one day decide to take emergency evasive action to avoid other vehicles, pedestrians, or maybe even wildlife in the road. Driving at speed is a dangerous activity, and handing over life and death decision making to artificial intelligence will create a whole bunch of moral dilemmas.


Road rage (at your own car)

On the roads, we always have someone or something to rage at. It’s never us that makes the mistakes: the cyclists, pedestrians and other drivers are always at fault. But in a world of driverless cars, what happens when it’s our own vehicle that let us down? Perhaps it’ll divert off to a mathematically quicker but less familiar route? Or maybe a pesky system update will render your vehicle useless while it installs.

It won’t take long for the entrepreneurs in the room to spot the profit potential of automated journeys. Picture a world where drivers have to pay microtransactions to evoke optional journey enhancements, such as to overtake the slow car in front;  or where you can enjoy a discounted ride if you spend 5 minutes circling around a block of billboard adverts. With the windscreen no longer needed by the ‘driver’, this space could now be used for adverts too. Think this is science fiction? Just look at Uber’s already successful ‘surge pricing’.

In 2017, having a medical emergency at the wheel generally means that you’ll never made it to your intended destination. Usually, passers-by will call an ambulance if they find you unconscious in the hedgerow. But that was then... imagine a world where your car keeps going, regardless of how well you’re feeling.