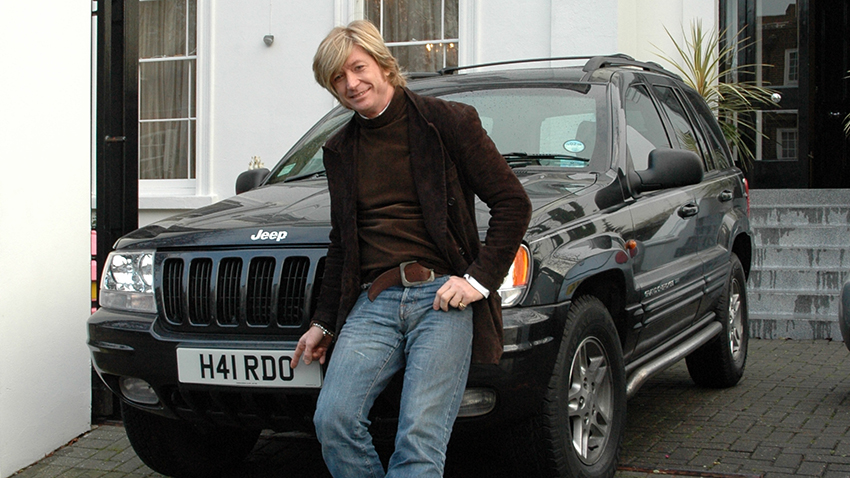 A quick test of your current affairs knowledge: can you name three celebrity hair stylists?

Hands up everyone who thought of Nicky Clarke and then struggled to come up with more… Most of you, eh? Not to worry, the same thing happened when we tried it in the editorial office.

Not since the swinging 60s, the era of Raymond “Mr Teasy-Weasy” Bessone and Vidal Sassoon, has there been a stylist to the famous who has become quite such an A-list celebrity in his own right. In Nicky Clarke’s case the fame is well earned, and his ability at his art is in no doubt. It takes a rare talent to sweep both the British Hairdresser of the Year and London Hairdresser of the Year awards in the same year.

Nicky Clarke’s career began in the most auspicious of environments. In the 1970s, at the age of 16, he went to work at the legendary Leonard’s of Mayfair.
“I was advised – and rightly so, I still believe – not to go to college. Go to a good salon instead. Start at the bottom, sweeping the floor and polishing the brass. You know you can’t go any lower, so you concentrate on aiming high.”

His aim was obviously true. Nicky now owns salons in Mayfair, Manchester and Birmingham. He opened the Mayfair salon in 1991, at the urging of his business partner and former wife, Lesley. It was a great move; the business rapidly went from strength to strength, and the list of rich and famous clients just got longer and longer. Gwyneth Paltrow, Sophie Dahl, Yasmin le Bon, George Michael, David Bowie, Gary Kemp, Damon Hill, Nick Faldo, Gary Lineker, Denise van Outen and others have all visited Nicky. And then, of course, there are the royal clients… but space is limited, so we’ll stop there for now.

In addition to the salons themselves, Nicky and Lesley have widened their focus to include their own haircare products. In 1993, they introduced the highly successful Nicky Clarke Hairomatherapy range. Additional lines have followed including the Nicky Clarke Electric range of home styling tools, and Colour Therapy and Vita Therapy supplements to promote optimum hair health.

Nicky Clarke’s status as the king of hairdressers is beyond doubt, as are his household-name credentials. Indeed, he has popped up in the most unexpected places – especially on television: Hell’s Kitchen, Comic Relief, Shooting Stars, An Audience with Elton John, Absolutely Fabulous… Then of course there are the regular appearances on daytime TV. Pretty much any make-over show worth its salt has sought his involvement.

So, when Nicky Clarke decides he would like to personalise his car a little, there is only one number plate that really says it all: H41 RDO.

The Regtransfers.co.uk team delivers Nicky’s new plates on the day of the interview. Nicky is delighted, and now sports the great registration on his Jeep. His daughter, Tilly, obviously appreciates the perfect match as soon as Nicky shows her the number.

“No way! Oh my God, that is so cool! And it’s really quite subtle.”

“Yes, it was kind of a pulling thing but just a fraction too subtle. No one ever got it! They just saw the D8.”

“No,” insists Harrison, tongue firmly in cheek. “One of my best friends, about a year after I got it, said ‘aren’t those your initials?’.” A hint of gentle sarcasm creeps into his voice, as he grins, “I was like, ‘No! Really?’.”

The whole family’s enthusiasm for their private number plates is quite evident and it is great to see people really enjoying them. Harrison in particular is a fan. “I am always looking at plates,” he says. “I just think they’re good. Something simple like three letters on a car, it stands out.” Harrison produces his mobile phone and shows a photo he took of a plate he saw and particularly admired near where he works.

Nicky laughs. “You just went and took a photo of it?”

Nicky is actually the last member of the family to succumb. Lesley also beat him to it: her Porsche bears the impressive 1 LC. After some time, Nicky began to realise that everyone around him, both family and friends, seemed to have added the personal touch to their vehicles, and he did start looking.

“It was one of those things I never really thought about, but a friend of ours has got N1 KKY or something similar. She’s a client and a friend, and of course every time she pulls up in her really girly car everyone thinks it’s mine because of the private number plates! I tell her not park it too near the salon, please! But with mine, it’s one of those things where I haven’t really gone out and thought ‘Oh, I must get one with 1 NC‘ or something. I prefer the amusing side of it.”

It really does seem that it is the sheer fun aspect that interests Nicky, rather than any urge to show off or demonstrate his success with his number plates. That emphasis on fun and enjoyment is obviously a prime motivator in Nicky’s professional life too, and he is still very much hands-on where hairdressing is concerned. The passion for his craft clearly remains, and is reflected in his preference for the youngest, rawest recruits when training new staff. As he opens more salons, Nicky obviously find himself in need of top-notch stylists, but he would rather train from scratch than try to force people to unlearn the techniques taught by other stylists.

“It’s not like a KFC franchise,” he says. “It’s not a situation where I can say ‘Here’s the recipe, now off you go!’, so I can’t have just anybody doing it. I prefer 16 year olds to train: it means I get them raw, and I really do like being able to mould them. There is no past training to overcome.”

So is Nicky’s approach to styling really that different?

“Yes. That’s why I prefer to train from raw. If someone has been trained in another method and they suddenly move between companies, well then there is generally just slight tweaking to be done. Moving from that to what I do is a major shift – a real change.

“For one thing, my method involves dry-cutting in a way that makes it quite an unusual thing. There’s not been too much of that in the last 30 years, just a few of us doing it. I do what I call my ‘rough sketch’ wet, but all my fine-tuning is done dry. It’s like a piece of sculpture: like you’re chipping away at something until it’s absolutely right. The attention to detail is much greater. It’s a hard thing to teach en masse because you’re basically trying to show someone how they really have to use their eyes. They’ve almost got to breathe it and live it. “So I have assistants working with me very closely, and I suppose from the outside it looks very grand when you’re doing it.

People sometimes think ‘Oh he’s being such an arse, he needs someone holding the hair for him!’, but what they don’t get is that there are two very real reasons for it. First of all my attention to detail: some sections can be that delicate, so I have somebody holding so I can work on that detail. Secondly, that person who is working with me is learning by actually doing, living it and breathing it, so the method of training is much more fast-track. They are literally on top of it and seeing everything that I do.”

Journalists have misunderstood this close-up training style in the past, and articles have depicted Nicky’s process as a conveyor belt, and him as pretentious and, as he puts it, ‘swanning around’.

“Oh, I’ve had a that a few times, because I generally have at least two assistants with me all the time – sometimes I use three. But, you know, I’m juggling. I’ll do one wet and while that’s being rubbed dry, I’m on the next one. So, I suppose it’s easy to think it’s a conveyor belt, and for people to think I’m being very grandiose, but actually there’s a method in my madness, and it means I can give more people personal attention.” Do Nicky’s stylists in all the salons follow the same fundamental technique that he has been telling us about?

“Yeah, oh absolutely. I know that everyone has their own take on it, and there are some people who don’t necessarily do it exactly as I do, and that’s always the way. I mean, if you’re employing a hundred and fifty people they’re always going to have some of their own methods, but the one thing that stays constant with us is the emphasis on that kind of detail, on that finish that makes it part of our house style.