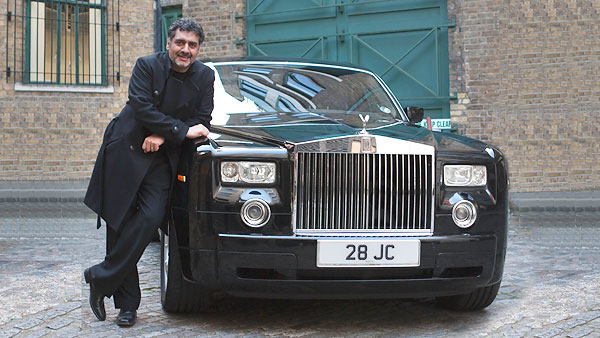 With hard work the business flourished, and by 1987 Alexander Mann had moved to larger premises and was employing a number of people. The company continued to grow, but James felt the urge to develop new interests.

In 1992 he appointed someone to take over the running of Alexander Mann and turned his attention to a new project. Humana International, an executive headhunting company was co-founded in 1993 by James and American recruitment expert, Doug Bugie.

In 2002, James Caan sold Alexander Mann, which had, by that time, grown into an international business with a turnover of some £130m. The following year he graduated from the Harvard Business School’s Advanced Management Programme, and was named PricewaterhouseCoopers’ Entrepreneur of the Year. In 2004 James founded Hamilton Bradshaw, the company of which he is still chief executive: and that brings us pretty much up to date, except for the project for which James is probably best known to the wider British public.

In 2007 he joined the panel of Dragons’Den. The show has enjoyed phenomenal success, appealing to a very wide audience including people who have otherwise had no interest in business. Although produced by the BBC in the UK, Dragons’ Den is, in fact, a Japanese import that has been adopted by at least a dozen countries.

James has expressed great enthusiasm for the show, which combines an entertaining format and a panel of strong personalities with the added excitement of real businesses dealings involving large amounts of money. Viewers know they may be witnessing the dashing of contestants’ dreams or the birth of successful businesses and brands.

In a recent television interview he said,“I love it. I think it’s one of the best experiences I’ve ever had. It’s been so much fun.”

Throughout his career, James has enjoyed nice cars: Mercedes, Rolls-Royce, Maybach; objects of desire and envy for most car lovers. Like many of his Dragons’ Den colleagues, James is also a confirmed fan of good personal car registrations.

“I think the first number plate I bought must have been in 1979, I think. I used to be in a building called Lime House, and the number plate was ‘JC Lime’ which I thought was, you know, quite humorous. My [Rolls-Royce]Phantom has got 28 JC and I’ve got a Maybach that has got “Caan’s” on it – C4 ANS.”
The enthusiasm seems to have spread to the rest of the family too.

“My daughter’s name is Jemma and she’s got ‘Miss Jem’. My wife Aisha has got ‘Aisha’. We can’t really find something appropriate for my daughter Hanah yet, but she is looking.”

For James, the appeal of private number plates is mostly the fun aspect, and he admits that he is, as he puts it, quite a veteran in this area.

“Somebody sent me an email last week with the number plate ‘Dragons’, saying would I be interested in buying that? I said, well thanks, but actually I’m ok at the moment. I think that might have been a little bit too much really.”

James is happy with the personal plates that he and his family own, and isn’t seeking anything more ostentatious or conspicuous.]

“I’d like to find something for Hanah really: her initials, or ‘Hanah’ or something of that nature.”

Although his own interest is casual, and something separate from his business concerns, James does recognise that there is a potential investment angle in personal car registrations.

“If you look back over the last ten years, the value of number plates has gone up quite a lot. You know, there’s only one of each plate, and I also think that’s the fun thing about it. If I wanted JC 1, I’d be the only person in the country who had got it.”

James has not yet been tempted to buy plates as an investment himself.

“I tend to stick to businesses I know and understand.”

That is a tendency that is clearly demonstrated in his business track record. His long-term interests have been in those industries he knows well. In that context, Dragons’ Den has been something of a revelation to James. It has, in some measure, perhaps broadened his business horizons and encouraged him out of his investment comfort zone.

“It’s allowed me to see opportunities and to meet people that I otherwise would never come across. I mean, do I look like the kind of guy who’s going to invest in a dog treadmill? But that was my first Dragons’ Den investment! I think it takes you into areas that otherwise you might never consider.”

James Caan comes across quite differently from some of his Dragons’ Den colleagues. Where some of the other Dragons project rather tough and daunting personas, James exudes an air of calm good humour and affability. Throughout the interview his responses to questions are littered with jokes.

His attitude to life in general seems very bright and positive. His interviews in print and broadcast media often contain the kind of anecdotes and observations that one might expect to find in a motivational talk, but with Caan these things aren’t contrived or clichéd. When asked, during a TV interview, if he thought that rags-to-riches entrepreneurs were driven by a feeling of having nothing to lose, he immediately responded that he rather thought that they were driven by the feeling of having everything to gain.

Caan acknowledges the valuable lessons he learned from his father, and says that he leaned a great deal about how business might be conducted in an ethical manner. His father taught him that business need not be dog-eat-dog. There is no need for each transaction to involve a winner and a loser. It is possible, and desirable, for both sides to walk away feeling positive after striking a deal.

One trait James Caan shares with his fellow Dragons is his inclination towards philanthropic work. He has established the James Caan Foundation, an organisation dedicated to improving the prospects of children, both in the west and in developing nations, who formerly lacked access to education. He has built a school in Lahore, Pakistan where disadvantaged children, whose families cannot afford to educate them, may attend for free. James is also involved with a number of other charitable trusts including the NSPCC in the UK.

Some have said that the British public resents success, that we take delight in the failure of others. The evidence doesn’t support that view. What seems fairer to say is that we celebrate the success of those who we deem to deserve it. As for what makes someone deserving of wealth – well, it seems that we often base that judgment upon what they do with it. Happily, many of the new breed of celebrity entrepreneurs, people like James Caan, are reassuringly in touch with the real world. They are aware of their own good fortune and of the hardship experienced by others, and that awareness moves them to act.

It is hard to resent the success of people who do the right thing.

As James says, “…Money’s great – but it’s what you do with it that really counts.”