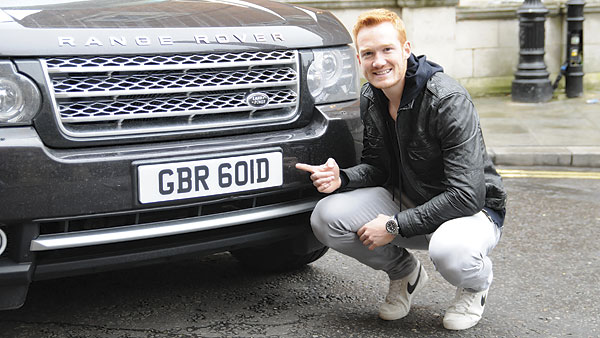 Olympic and Commonwealth Games gold medalist Greg Rutherford is something of a local sporting hero to people in Regtransfers’ neighbourhood. From our offices in Dunstable it is just a quick drive up the A5 to Greg’s home town of Bletchley, now part of Milton Keynes, and to his current home near Woburn Sands. Faced with such a convenient geographical coincidence, it is, perhaps, surprising that we actually met Greg in the middle of London, some 35 miles in the other direction.

Bearing in mind Greg’s spectacular gold medal winning performance in the 2012 Olympics we thought it would be appropriate to mark the achievement in some way when we delivered his personalised number plates so we arranged for a posh presentation box. In retrospect, perhaps that was a mistake if we had hoped to get Greg to wax lyrical and enthusiastic about personal registrations - although he was very pleased with his plates, he almost seemed more impressed with the box.

“A personalised registration is something I’ve considered so many times and never gone for. I know other people who have them: Andy Turner, has got L10 RUN or something like that on his plate, so that’s for 110 metres hurdles. But I thought GBR 601D was absolutely fantastic for me and I was really excited. And it’s come in an amazing box as well. You’ve really gone to town on this, guys. It’s like a big fanfare of a box: absolutely out of this world. This is going to take pride of place at home; I’m going to put it on my mantlepiece.”

It seems as if Greg is going to become increasingly accustomed to elaborate presentations and accolades. At the time of our meeting he was still riding the wave of post-Olympic aftermath: that pervasive delight that swept the country after the home team’s splendid performance at London 2012, where they secured a total of 65 medals: 29 gold, 17 silver and 19 bronze. His career and its gold medal-winning culmination up to that point was recognised with the MBE in 2013, but in the time that has passed since then, Greg’s successful streak has grown into a broad stripe of apparent invulnerability. Gold was his at the 2014 Commonwealth Games in Glasgow and again at the 2014 European Athletics Championships in Zürich. This is an athlete on top form.

One might think that a serial gold medal-winning and British record-holding long jumper would have to emerge from the womb with spring-loaded knees and a love of sandpits, but Greg Rutherford arrived at his specialist discipline after a considerable journey through various sports.

“I did a bit of everything: football, rugby, badminton… I did every sport that was thrown at me. I started off in track and field as a sprinter but then realised that I’d never be quite good enough to go on and take that up as a professional. On the other hand, when I tried the long jump I progressed rapidly, so I stuck with it. I got to about 18 and I thought, Right, I’ll do this as a job as well. Then I really dedicated everything to it. Up to that point and that decision I’d taken everything a little bit relaxed, a bit chilled out.”

One way or another, Greg had always intended to compete professionally.

“I told myself that I would make it in sport of one sort or another, and that’s why I tried everything I could. Football was an interesting one. I had trials at Aston Villa when I was about 13, but I got a bit disillusioned with it because I didn’t enjoy it particularly. There was a lot of pressure and eventually I just walked away from that sport and tried other things. I was enjoying track and badminton probably a bit more. I realised that badminton was way too hard for me to take on as a career for life, and track and field just seemed to be getting better and better. I loved it as well - being outside all the time, being really active.

“I had a job until I was about 19; then I got funding, which meant that I didn’t need to have a job. So I had the support arrangement that meant that I could pay the bills I needed to pay as well as train. That basically gave me the opportunity to train full time. So, I trained practically every day. As I say, I focused everything on track and field. That’s basically what your life becomes: everything is about that and you can’t do things that you’d normally do. All of a sudden, at 18 or 19 you’ve gone from going out with your mates to having to stay in and sacrificing the things you used to do. But for me, as I say, I was determined to make it in sport and I realised that was what I had to do.

“The Olympics was the culmination of so many years. The thing is that much as it was a fantastic year, I do remember seven years before that in my professional career that hadn’t been that good. It’s really tough in track and field: it’s not the same as things like football and rugby where you get a big salary, and no matter what happens - injury or whatever else - you’re earning a large sum of money. In track, if you’re injured then you’re missing competitions and you have no chance of earning money. So, for many years it was a bit of a struggle and things weren’t ideal for me.

“I remember earlier when I went to the World Championships in amazing shape, ranked highly and I really thought I was going to win a medal. Injury again meant that I got completely and utterly knocked back, but then all of a sudden I have a good year and it just happens to be the best year to have a good year. I went to the Olympic Games feeling incredibly fit to start with and really, really confident. All year I’d been jumping well. I’d had a couple of little niggles, but nothing major, and then all of a sudden I was in the Olympic stadium, feeling fit and healthy and ready to go.”