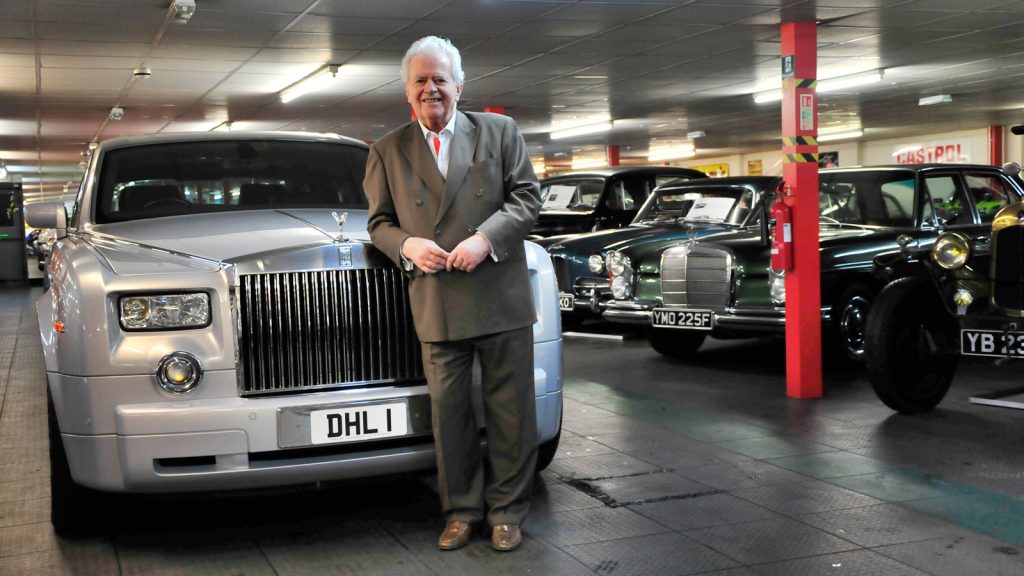 ‘Mr Lockup’, ‘RD’ — whatever you call him, you can trust Rodger Dudding to keep your valuables secure, in one of his many lockups and storage centres across the United Kingdom. With the money he has made through his lockups and other successful business ventures, he’s amassed a collection of classic and high-performance cars second to none. We look at the man, his career, and of course, his many marvellous motors.

Veteran readers of this unique periodical may recall that we visited Rodger Dudding back in 2014. We were fascinated by Rodger’s amazing collection of cars and fine cherished registrations, and we were intrigued by his unusual entrepreneurial interests.

As we mentioned in the earlier article, as a young man, Rodger joined the Royal Navy, where he trained as a mechanical engineer. Sadly, he suffered a fall in 1959, while serving on a Town-class light cruiser, and the back injury he sustained in the accident brought his naval career to an abrupt halt.

“I was determined to become self-sufficient and run my own business,” Rodger recalls, “as the injury meant that I didn’t know what the future may hold as far as work was concerned.”

In the meantime, until he could find a way to achieve the independence, he wanted, Rodger found employment. Before long, his earlier engineering training equipped him to progress.

“I started my career with the Rembrandt/Rothmans cigarette group, but was subsequently invited to join a vast American conglomerate, American Machine and Foundry, as deputy to the president of sales.”

His work meant that Rodger travelled extensively in Europe, and it was during a period in Stockholm, Sweden, that he found inspiration for his first venture. At an establishment in that city, Rodger noticed a simple queuing system involving plastic tags that were issued to customers and returned as their turn came to be served. While the system itself was simple and effective, Rodger felt that several aspects left room for improvement: the potential hygiene issues posed by the reused tags for a start. Disposable paper tags made much more sense.

Rodger christened his new company Lonsto — an amalgam of London and Stockholm — and the success of Lonsto Queue Management Systems enabled Rodger to look for new opportunities. His next venture was a foray into the world of commercial property ownership when he acquired a number of lockup garages in London. Although the business started out very small, Rodger saw potential for real revenue if the operation were to be scaled up substantially. In this case, “substantially” meant increasing his portfolio of garages from the initial handful to the current 14,000.

“We believe our nearest competitor has about 800 garages,” says Rodger, “and we continue to grow our massive portfolio weekly.”
This second successful business provided a gateway into other areas, and Rodger now has interests in residential property developments as well.

Reaping the rewards of his labours over the years has meant that Rodger Dudding has been able to pursue his interests and passions. His love of vintage cars led him to establish a breathtaking collection of classic vehicles. When we visited previously, the collection was housed at Rodger’s Studio 434 in Potters Bar, Hertfordshire. At that time, he expressed a desire to find larger premises and to expand his collection further. In the intervening period he has done both and the collection, formerly 200 cars, has grown to more than 400. One facility proved insufficient for the scale of Rodger’s collection and so the operation is now split across two huge warehouses designated Studio 434/1 and Studio 434/2. Studio 434/1 is home to Rodger’s personal collection. At 40,000 square feet, it also contains offices and purpose-built storage for valuable vehicles.

Studio 434/2 is the new facility. With a floor area of 200,000 square feet, it is a colossal edifice containing more vehicle storage, offices, a film studio with production facilities, event spaces, kitchens, a luxury flat and more. A truly extraordinary location.

Studio 434 is a fairly diverse operation. In addition to housing Rodger’s beloved cars and storing vehicles owned by clients, the business offers vehicles for hire — notably for movie and television productions. The Darling Buds Of May, Peaky Blinders, Mr Selfridge and Downton Abbey are just a few of many whose authentic period atmospheres have been enhanced by Rodger’s classic cars.

Amongst the remarkable cars in his stable, Rodger has a whopping 24 Aston Martin Lagondas, 11 Ferraris, both classic and modern, Rolls-Royces of various vintages, 22 Bentleys and a number of Mercedes. In addition to these, he also has a number of automotive oddities, such as a DeLorean, an early electric Zagato Zele and a Messerschmitt KR200. Hardly surprising that estimates for insurance purposes value the collection at approximately £150 million pounds.

With more than 400 cars to choose from, one might be excused for thinking that it would be nearly impossible to point to one and declare it the absolute favourite, but Rodger has absolutely no hesitation when asked to say which car means the most to him.

“It has to be my late father’s split-windscreen Morris Minor with its 803 cc engine. Father bought it new in 1952 and, on his demise, it came to me.”

That personal connection trumps all other considerations. Studio 434 is home to cars previously owned by the rich and famous, from Princess Diana to ‘5th Beatle’ Sir George Martin. It contains many vehicles individually worth hundreds of thousands of pounds, but the one that Rodger wouldn’t be parted from is his father’s modest Morris. Somehow that makes us happy.

Where there are spectacular cars there are cherished number plates, and Rodger Dudding is a devotee.

“Without equivocation, I can say that I consider personalised number plates a good investment. The first plate I purchased was 76 D – the D being for Dudding. I now have numerous plates with the D suffix, such as 81 D which looks like ‘bid’ and so is ideal for auction houses. I also have many permutations of DHL, including DHL 1, DHL 2, DHL 3, et cetera. The DHL stands for Dudrich (Holdings) Limited, another company within our group.

“We have recently purchased 8888 RD and 8888 EM from Regtransfers. We have a lot to do with the Chinese community and the number 8 is considered lucky by Chinese people. They find those two plates most interesting.”

Rodger’s vast collection of classic vehicles contains some rare examples as well as individual cars with unique histories. Some, as we’ve seen, were previously owned by famous and important people. Curated collections of this kind are very rare, and on this scale pretty much unprecedented. Surely the treasures of Studio 434 should be preserved.

“I am reviewing the situation to put the whole lot into a trust. I’d like to maintain the integrity of the collection for future generations, so that is being discussed with my legal and accountancy team. In a few short years, cars, as we know them today, will be superseded predominantly by electric vehicles. As our collection ranges from a 1904 Vulcan to the current RR Wraith, we feel that we have built something that should remain together for posterity.”