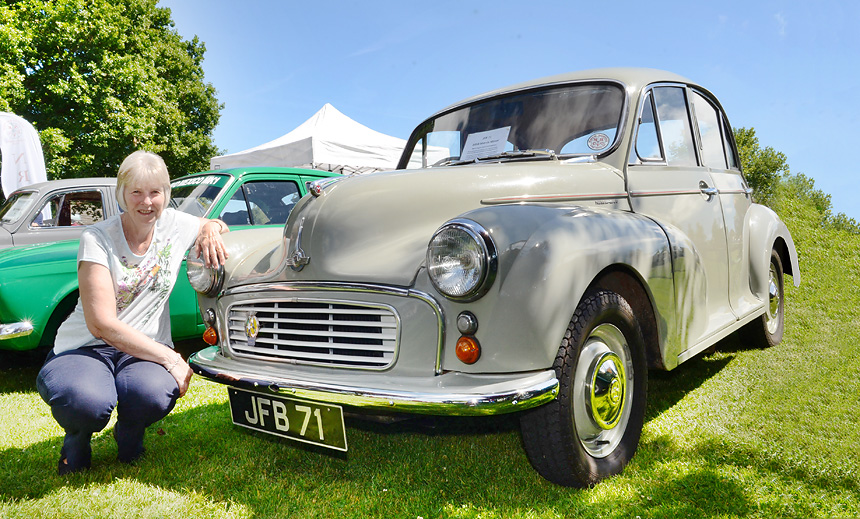 Reunited with the perfect plate

June Jones’s car has been reunited with its original registration after 31 years.

Her grandfather bought the Morris Minor new in 1958. The car, registered that year by the Bath County Borough Council licensing authority, bore the registration JFB 71. In 1973, when he gave up driving, he handed the car over to June.

“In 1986,” June recalls, “we decided to sell the number plate to help fund our daughter Karen’s musical career.” At that time, Karen played tenor horn with Bendix Brass Band, along with her grandfather who taught her to play. Then, as time passed, Karen switched to French horn. She attended the Royal Northern College of Music in Manchester and when she graduated, she freelanced with the Halle Orchestra and the BBC Philharmonic. She is now Head of Music at a grammar school in Manchester but still plays with The Royal Artillery Territorial Army Band.

The car was driven around bearing its replacement registration until it was taken off the road in 1994 to be garaged for the next 23 years. June and her family had always rather missed the original registration that they’d had to sell, so they were delighted to see that very number come up for sale with Regtransfers a few years later.

“We put in an offer to buy it back,” says June. “Unfortunately the seller decided to take it off the market, and we were absolutely gutted.”

Following that disappointment, the family looked every week in the newspapers and online just in case JFB 71 should come back on the market. “Imagine our delight when, in November 2015, we saw it advertised again with Regtransfers! We immediately put in an offer which was accepted. So, after 31 years, the number plate has now been returned to the original car.”

Having reclaimed the original registration, time and effort were invested in returning the Morris to fully roadworthy condition. “The car is now restored,” says June, “and we have taken it to several rallies.”

In addition to this new interest, June and her husband, Keith, who are both now retired, spend their time with their two dogs, caravanning, ballroom and sequence dancing, socialising and helping out with the grandchildren.

“Our experience in purchasing the plate from you was very positive,” June concludes. “The sale went through very efficiently with the help of knowledgeable and friendly staff. We have since purchased K1 JEJ [which incorporates the initials K for Keith, JE for June Elizabeth and J for Jones] from you to put on our Mini Cooper.”