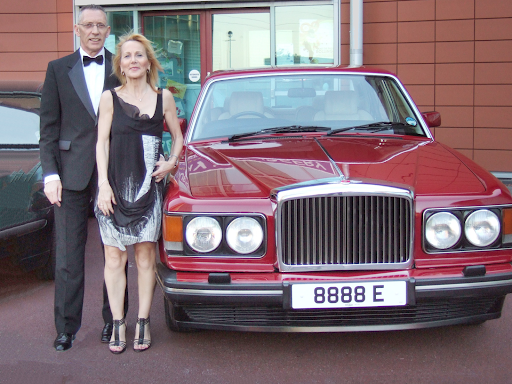 When Mike Elwell received our Regwise newsletter, it prompted him to get in touch and tell us about his impressive collection of personal number plates.

The introduction to Mike’s story is a bit different to most we hear: his initial inspiration wasn’t a posh Rolls-Royce or a celebrity’s cherished number plate...

“I first became interested in car numbers when I was very young,” he says. “A local flowerpot manufacturer had POT plates on their cars.”

Mike acquired his first private registration, MJE 242, for the princely sum of £20 from an advertisement in Exchange and Mart soon after he got his first car. Mike’s middle name is John, so the number incorporated all of his initials. Unfortunately, the number was lost when the car was scrapped.

Mike wasn’t the only family member to part with a nice number “At that time, my wife, Ursula, had 53 MDH which she sold with her car,” he says.

In the early 1970s, Mike and Ursula started buying and selling numbers issued in their local area, including registrations such as 4 PEA, 2 SEA and 4 MEA.

“We acquired two numbers that we still own today,” says Mike. “The first, 8888 E, was on a car which the owner was about to scrap for £10. I said I would give him £5 if he would let me transfer the number first and he agreed. The second was 6 UTE, which Ursula used. That one was bought on an Austin A40 for £40.”

That Austin subsequently underwent several changes of identity. When the couple transferred 6 UTE from it, the car was issued with 6019 DH. That number too was sold, at which point the car acquired 3 XDH and then 19 XDH, which were both sold, as was the car for the price they paid for it. “Back then,” Mike says, “the numbers were transferred by the local Motor Tax Office and replaced with unissued numbers from the area.

I always used Walsall for a number of years and they would issue unissued reversed DH numbers. One time when I went to transfer a number all the DH series had been issued and I was told it was my lucky day as they had to start issuing a new sequence and gave me 1 XDH. I rushed home to get two details of cars awaiting transfer to try and secure 2 XDH and 3 XDH, but missed out and ended up with 3 XDH and 5 XDH.”

Mike always wanted a Mercedes-Benz C55 AMG, so for his 70th birthday this year, he finally purchased one along with the perfect number for it C55 AMG.

“We have had some interesting times due to our involvement with car numbers, visiting number plate rallies, including the first get together at Woburn Abbey and auctions. The only regret I have is that, when we first started to have numbers, the late Noel Woodall [the respected autonumerologist] had U 2, U 4 and U 6 for sale - ‘U’ being my wife’s initial. But in those days there were no retention certificates so numbers had to be placed on cars. Having only one car at the time, I made a close offer to the price wanted for all three just for U 2 but the owner did not want to split them.”

Mike relates a number of amusing incidents, including the police calling to recover a car that had been put up as a gambling debt in respect of a car he had transferred a number onto a few years earlier. “One of the numbers ended upon a car that is displayed in a museum.” The recovery of a car years after they transferred the number under the stolen vehicle came, ironically, from a pool belonging to the very same flower pot manufacturer who first promoted Mike’s lifelong love of number plates.