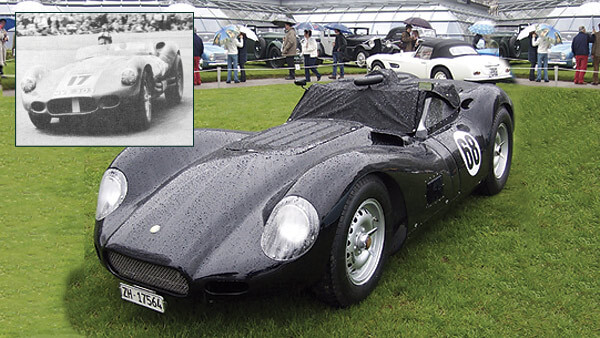 Two multi-millionaires fighting their way through the courts over a car registration were recently told that they had wasted both the huge amounts of money and the considerable time they have invested in the argument.

Allen Lloyd and Stefan Svenby have been in dispute for four years over the right to display the number plate WTM 446 and the chassis number BHL 126 on their 1959 Lister Jaguars. The two men left court at the end of February after a judge told them it was not his business to settle such quarrels.

Mr Lloyd, whose fortune was generated by the Lloyds Pharmacy chain, sued Mr Svenby, as a result of conflicting desires by each man to lay claim to the original car that bore the disputed ID marks. That particular vehicle had not only raced in the 1963 Le Mans 24-hour race, but was also the star of the classic British racing film, The Green Helmet.

The court endured a week of claim and counter-claim about the various states of disrepair into which two chassis and two complete sets of parts had fallen before being restored to their current impressive conditions. However, Mr Justice Stanley Burnton refused to rule that either man’s car had a better claim to the chassis number, and consequently the registration number, than the other.

Moreover, the judge expressed his “wonderment” that the two men had pursued the quarrel so far and spent so much money. He said there was no dispute regarding ownership, nor any confusion as to which car was which.

There had been no suggestion of dishonest or improper behaviour by either man. The judge said: “At the beginning of the trial I expressed surprise that two seemingly intelligent and honest men would seek to resolve this dispute by extensive litigation, which in the event occupied seven days of court time, rather than by compromise.

“I was told that a considerable sum of money turns on my decision, although I am bound to say that the evidence for that is sparse, and that whatever that sum may be it has, I am sure, been substantially exceeded by the legal costs the parties have incurred. My wonderment did not diminish during the course of the hearing.”

He opined that the genealogy of motor cars was not of itself a proper subject for the court to investigate or decide, unless it was to rule on the rights of the parties in cases that were “justiciable”, that is cases which could actually be determined by a court of law. But if there was no justiciable cause of argument, the court had no role to play.

The two men will have to wait to find out who foots the legal bill, estimated at more than £500,000 because the judge reserved his ruling on that aspect of the case.

He also refused the men the right of appeal, although either can make a direct application to a higher court. The feud between the two men began more than four years ago.

Mr Lloyd, who made £32 million from the sale of his pharmacy empire, said his car was essentially the same as the original machine, having been rebuilt from the bulk of the original parts.

Mr Lloyd claimed that Mr Svenby’s car, a Lister Jaguar of a type known as the Spaceframe, was a “reconstituted wreck” and a “copy built from a kit of parts”.

In response, Mr Svenby said that the other man’s vehicle had been crashed soon after its Le Mans race and had lost the right to the chassis number because it spent 20 years off the road, being rebuilt.
The judge has referred the case to the DVLA and the Department of Transport.