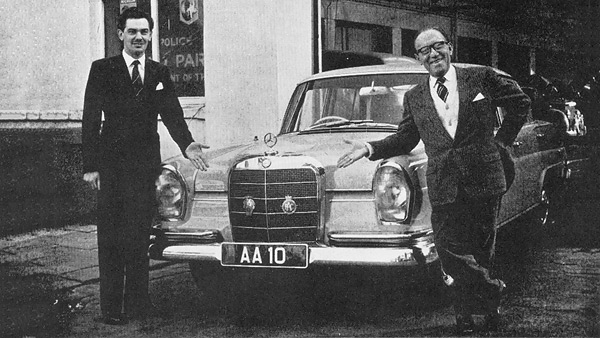 Noel Woodall coined the phrase Autonumerology in 1964 to put a name to his new found interest in car registrations, thus making him the world’s first Autonumerologist. In the 40 years since, he has remained fascinated by personal number plates and probably knows more about them than anyone else. And on meeting him it is obvious that he also accumulated a myriad of amusing stories to illustrate the subject.

Noel was born (and named accordingly) on Christmas Day, 1930 in Oldhill, Staffordshire. His father was a photo-framer and his mother dealt in Art Deco objects and mirrors amongst other things. Noel recalls: “Our house was more like a shop in those days, perhaps that’s why, from the age of seven, I became involved in buying and selling.”

At the age of 17, Noel volunteered to join the RAF as an Air Crew Navigator and completed three years of happy service. When he left the RAF he worked for an early radio and TV retailers before forming his own company, Electraders, who specialised in erecting aerials. He continued running the business until his move to Blackpool in 1961 where he worked for Currys, a company that is still around today.

Noel’s interest in number plates began in 1962, not long after moving to Blackpool. He was driving back to his home in the world-famous seaside resort one evening, when he saw a car with the registration BB 4 . It captured Noel’s imagination and he immediately thought, “That’s an interesting number plate, I wonder who owns the car?” He started asking around and his tenacity paid off when he discovered that a local bookmaker owned it. This was to be the beginning of Noel’s fascination with personal number plates. Interestingly, BB 4eventually came into the possession of Regtransfers but, as with most quality registrations, was soon sold to a new proud owner from Kidderminster in 2004.

Noel went to the local library to see if there were any books on the subject but found to his dismay that there were none. Undeterred, he decided to put an advert in the RAF’s Air Mail magazine asking fellow members for information about mayoral and distinctive number plates. It worked and he received so much information that he decided to compile and publish it in a small book entitled Car Number Galaxy – Celebrities.It cost him £250, which was 6 months’ wages to Noel in those days.

It contained a fascinating list of registrations, the cars they were on, and who owned them at the time. Noel did his homework and included in the book’s forward a brief history of car registrations from 1903 on, plus a whole page on the history of A 1 . The book also contained an index of registration letters and where the cars bearing them were first registered in the UK. The MP, Gerald Nabarro was featured heavily in this first issue as he owned NAB 1 through to NAB 5 (he eventually owned NAB 6 through to 10 as well). Other well-known registrations and their celebrity owners featured were, Arthur Askey (AA 10), Norman Wisdom (NW 4), George Formby ( GF 1 and GF 2 ) and Harry Secombe ( HS 92 ). A great many of the ‘number one’ registrations listed were on mayoral cars owned by local councils, eg: BK 1 (Portsmouth), FV 1 (Blackpool) and TR 1(Southampton).