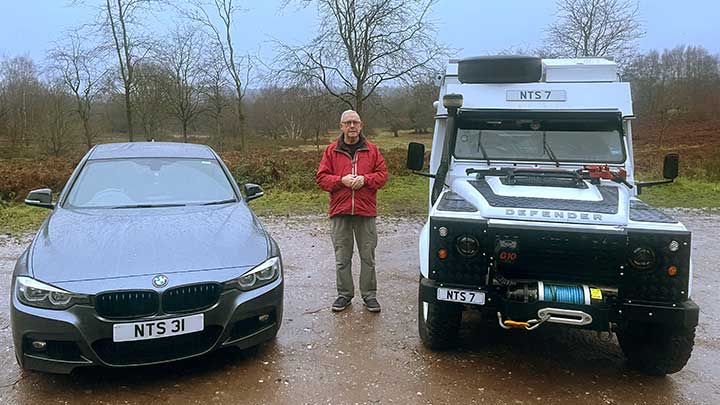 In 1964 Norman Seddon purchased a 1954, 803cc Morris Minor from a family friend, paying the princely sum of £100. The lady had owned the car from new and Norman jumped at the chance.

“I am not sure when the photo was taken,” Norman says of the picture on this page, “but it must have been shortly after I got the car because I replaced the flapping arm indicators with an orange light indicator in the same place, which is not in the photo.”

Norman was in the Royal Navy at that time, based in Portsmouth. He subsequently left the service in November 1967 having served eleven years. He got a job as a rep for the confectionery manufacturer Cadbury’s and, as the job came with a car, Norman sold the Morris on.

By a quirk of fate, although it is unknown what ultimately became of Norman's Morris Minor when it left him, the registration number survived and at the time of writing, you can buy VFC 7 on our website!

Private registrations for the family

During the 1980s, Norman first saw NTS 7 for sale. It would have been a fine initials registration for Norman Terrence Seddon but, unfortunately, someone beat him to it and so Norman settled for NTS 31 instead. As second choices go, NTS 31 was a pretty good one as it incorporated his door number as well as his initials. He also purchased BAB 1S from a local man for his wife, Barbara. The family has always said that the private registration is short for 'Bab is wonderful'!

The couple owned a large convenience store for thirteen years and, when they sold that business, Barbara started a children's day nursery. As BAB 1S also looks very like 'babies', her number plate became even more appropriate.

Once the nursery was up and running, Norman purchased a run-down newsagents which he built into another successful convenience store. That business was sold after ten years and Norman retired at the age of sixty.

“We also sold the nursery in 2005,” Norman says, “and went travelling in my 110 Defender Land Rover camper van. We shipped the vehicle to Buenos Aires and then travelled round South and Central America for eighteen months. In 2010 we decided to travel around the world.”

Their adventure was, indeed, a global one and the couple visited Australia, the United States and Canada. After two and a half years Norman and Barbara returned to the UK in late 2012. Sadly, Barbara passed away some years ago but her BAB 1S registration number remains in the family and is now on her grandson's car.

In 2020, Norman acquired N31 NTS and Regtransfers was recently able to unite him with the NTS 7 plate he first wanted all those years ago. He very kindly describes our service as efficient, with no pressure.

Buying the plate from Regtransfers was painless, apart from parting with my cash!

“I now have a 130 Defender camper van,” says Norman. “I hope next year to ship it to Cape Town in a container with my friend's 110 Land Rover and then to travel round Africa for six to twelve months.”

We wish him bon voyage.

Just like Norman, you can also buy a number plate that resonates with your occupation, business or even simply your name. It is the perfect way to make your car more unique and special.