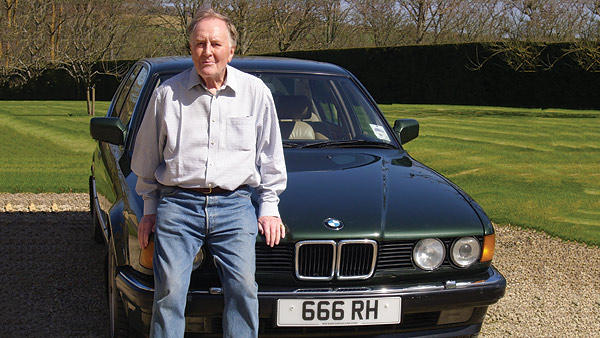 Robert Hardy is one of the UK's most distinguished stage and screen actors, and has been described as 'a national treasure'. In a career spanning more than half a century he has played many parts: some obscure, some well known, but to all of them he has brought his own unmistakable style. Hardy has played statesman, princes, outlaws, and even the part of Minister of Magic in several of the Harry Potter movies (before the red tape of a spineless insurance company brought a premature halt to everyone's fun by making his cover too expensive for the studio's budget). His participation in the fantasy movie adaptations of JK Rowling's books seems entirely apposite for a man whose university professors included both JRR Tolkien and CS Lewis.

Hardy found particular popularity in the 1970s and 1980s when he played the part of vet Siegfried Farnon in the television series All Creatures Great and Small, based on the autobiographical books of James Herriot. Another role to which he took very readily was that of Winston Churchill, whom he played several times in various television series and movies. Robert Hardy did meet the real Churchill on a couple of occasions and recalls that the old man had a particularly active sense of humour. In an interview with Cotswold Life, Hardy told of an evening when Churchill visited him and the late, great Richard Burton in a dressing room at the Old Vic theatre where the pair had appeared in Hamlet. Churchill approached Burton, who had played Prince Hamlet himself, and said, "Your Royal Highness, I wonder if I might avail myself of the amenities of your bathroom?".

Beyond the History Plays of Shakespeare, Robert Hardy has a profound enthusiasm for matters mediaeval, particularly matters mediaeval and martial. Hardy's immersion in the period is such that he can manage a pretty good approximation of authentic Anglo-Saxon diction and pronunciation of the time, using principles taught to him at Oxford by Tolkien, author of The Hobbit and The Lord of the Rings, a man Hardy describes as "enchanting".

Hardy has written books on the subject of longbows and presented a very well received television documentary on the Battle of Agincourt. He also advised the archaeologists responsible for recovering the sunken Tudor warship Mary Rose, overseeing the care of the longbows that were salvaged from the raised vessel.

At nearly 88 years of age, Robert no longer drives. Previously he had driven a BMW displaying the number plate 666 RH.

"I got the number plate fifty or sixty years ago as a birthday present. At first, I didn't even really want it, but I eventually grew quite attached to it."

That attachment is reflected by the fact that 666 RH continued to be displayed and was transferred from vehicle to vehicle when Robert changed his cars. He only finally parted with it when he took the difficult decision to give up driving altogether.