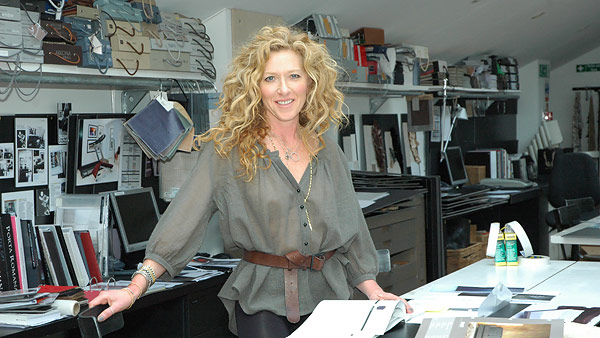 Our interview with Kelly Hoppen was conducted some time ago, before she joined Dragons’ Den. Her business star was already rising, and her schedule was full. Nevertheless, Kelly kindly set aside some time to meet with our reporting team at her studio in London.

In a career spanning nearly four decades, Kelly Hoppen has become one of the most high-profile designers in the UK. She has worked for countless rich and famous clients including David and Victoria Beckham and actor Martin Shaw. Kelly began designing when she was 16, the year her father, Seymour, passed away. Seymour worked in fashion, Kelly’s mother has a gallery in London and her older brother is renowned photographer and gallerist Michael Hoppen, so it is no great surprise that Kelly inherited some artistic DNA.

The drive and determination that resulted in her making her first million by the time she was 30, earned her an MBE and saw her installed in the infamous TV entrepreneurs’ Den is, at least in part, attributable to the profound effect of the loss of her father. Kelly is on the record as saying that it was that event that made her determined to be independent rather than reliant upon others.

Early design work was won simply by Kelly being approached by people who saw the results of her first projects – a friend’s kitchen, her own flat in London – and who then asked her to design spaces for them. Several of her first clients were racing drivers, and that connection with the trappings and pastimes of a privileged lifestyle has remained a thread throughout subsequent work, with Kelly designing interiors for luxury yachts, and British Airways aircraft as well as for first-class hotels and other glamorous buildings founded solidly on terra firma.

Her style is not for everyone. Critics claim it is sterile, dead, lacking in welcoming ambience. There is no denying a certain spartan, perhaps even defiant, cleanness to the lines and compositions of her interiors, but Kelly sticks to her guns. She has said that she dislikes cluttered florals and that she believes it is beneficial for people to go to sleep and wake up to restrained, neutral schemes.

Those neutral palettes are the aspect of her work that seem to be the main focus of attention. It is pretty much impossible to read a magazine story or interview in which taupe and beige don’t feature as prominently as the latest details of her private life, or her list of celebrity clients.

“I don’t know how taupe came to be my favourite colour,” Kelly says, “but somehow it did and then I was very much known for using it through all my books. Any shade of taupe is definitely my favourite colour. There have been so many articles, ‘Queen of Taupe’, ‘Taupe on Tap’. Everybody makes a joke of it but actually I just love the colour, I just absolutely adore it. People always used to call it mushroom… I suppose we sort of recreated it in a way. I really, really do love it.”

Not surprising, then, that the personal registration on Kelly’s car should be appropriately themed. Her Fiat sports the number plate T8 UPE. While the regulations don’t permit taupe or beige coloured number plates on UK roads, they do not proscribe ‘platespeak’ representations of the names of colours.

“My boyfriend bought T8 UPE for me. When I was given the Fiat the number just seemed absolutely perfect for the car. People wave and they stop and say, ‘Oh, Kel! Oh, how cute, taupe!’ Even though it’s an 8 everyone still seems to read it as ‘taupe’. So, it was kind of done with tongue in cheek, but it just suits the car. My boyfriend got one for himself too… I can’t remember what it is but he’s in art and it had something to do with art and his name, so that was quite cool. My kids all have number plates too, and we always kind of look down all the [lists of] names and stuff. Actually, I also have another personal number on another car, that one’s KEL for my name.

One recent project did see Kelly move slightly away from her trademark colour scheme. There was comparatively little taupe, beige or mushroom in the clothing designs she did for for Earth Couture. It was there, but it didn’t dominate.

“Yes, we had a collection that went into Harrods. For every piece that’s sold a mosquito coil goes to a child in Africa, which is really great. Every time someone buys something it’s such a great way to actually give to someone else, because people do buy anyway so it’s an easy way – they don’t feel like they’re losing out.”

It’s nice to hear someone in Kelly Hoppen’s position talk about giving to people whose lives are immeasurably harder, but then it should be no surprise. In many of the countries she regularly visits, poverty is a much more conspicuous issue than it is in the UK. Despite her obvious enjoyment of the things that her hard-earned success has brought within her means, Kelly remains in touch with life’s harsher realities. She is a supporter of a number of charities, focusing mostly on organisations that help young people (Prince’s Trust and CLIC Sargent) and those that fight serious illness (AIDS and breast cancer).

No wonder Kelly Hoppen is so famously health conscious. No one who wasn’t firing on all cylinders could sensibly hope to maintain the kind of schedule that she does. Traveling the world in the course of her work, coming up with new design ideas and scaring the life out of aspiring business people for the BBC. It doesn’t look as if there’s too much danger of Kelly getting bored any time soon.