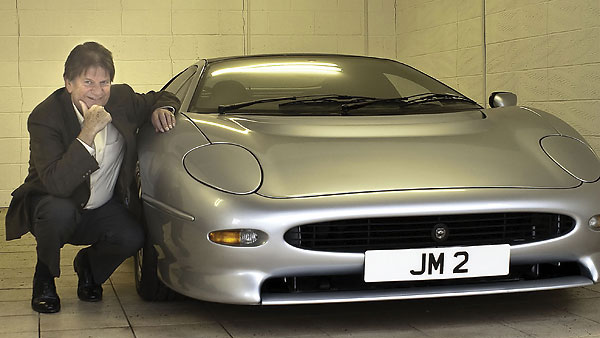 To those readers who have been with us since the second issue of Regtransfers: The World of Personal Number Plates, Sir John Madejski’s love of good personal number plates will come as no surprise.

He featured in that early issue with an enviable stable of fine cars and an equally impressive collection of top-notch private registrations.

Sir John has a number of claims to fame, but to most people he is probably known best as the Chairman of Reading Football Club. He is clearly proud of his association with the club, and fans acknowledge that he has done a lot for Reading.

The football club is the heart of the community. It’s an organic part of the area, and I’m very proud to be associated with it. I’ve been with the club for nearly 20 years now and we’ve had two seasons in the Premiership. I was rather hoping to go back to the Premiership last season, but we missed out at the final hurdle in the dreaded play-offs.”

His commitment is tangible, not least in the form of the stadium that bears his name, but Madejski is a businessman above all else and he has made no secret of the fact that he would sell to the right purchaser with deep pockets.

“Everything’s for sale my dear, even me,” he tells our interviewer.

“I’ll be putting myself on eBay soon.”

Sir John’s first business success was a general classified advertisement magazine, Thames Valley Trader, which he started in 1976. This first incarnation did not specialise, but before long its focus narrowed to concentrate on automotive sales.

The name changed to reflect the magazine’s more specialised approach and Auto Trader was born. A partnership with the Guardian Media Group provided the mechanism for wider exposure and circulation growth, and Auto Trader became a household name.

In 1998, John Madejski sold his publishing company for a reported £174 million. In that same year he provided Reading FC, of which he had been chairman since 1990, with its new Madejski Stadium. His business-like attitude toward a possible future sale of the club should not mislead the reader: his involvement has been active and effective. Indeed, Madejski’s support helped Reading into the Premier League for the first time in the club’s history.

The sale of Hurst Publishing did not mark the end of Madejski’s business interest in print and publishing. Even now, with a diverse empire that includes property, broadcast media, hotels and restaurants, he has a couple of ventures within the industry in which he enjoyed his earliest commercial success.

“I’ve got a magazine in Kuala Lumpur, the Malaysian Motor Trader, and that’s very successful. That has about two or three hundred pages a week. I also own the biggest and best state-of-the-art, web offset printing works in Europe, bar none. That is quite impressive.”

Sir John is especially enthusiastic about the products manufactured by his Clearview Traffic Group, a business in which he decided to invest in 2003.

“We make solar powered, illuminated road safety studs. These Astucia SolarLite studs literally light up the road. They need just two hours of daylight and it cranks them up for two weeks. If you look in your rear-view mirror you can see the road all lit up. They’re just state-of-the-art. We trialled them in South Africa on a piece of road where they’d had 27 fatalities.

"They put the SolarLite road studs in and it reduced the casualty count to zero. Why? Because you can see the linear pattern of the road. They’re fantastic. It’s a real safety product, a real winner. We’ve got them round the Reading FC stadium. It’s an international product and we sell them all over the world. There are a lot around England and you often see them. You know, they light up so well that you could literally just switch your car lights off and drive through. You don’t actually need your lights on to follow the road. I wouldn’t advise trying that of course!”

Amongst Sir John’s interests there is always an automotive aspect lurking somewhere. He is very fond of cars and has quite a collection of classic vehicles. Not surprisingly, his cars sport some equally exclusive registration numbers.

“I’m certainly not fanatical about number plates,” says Madejski, echoing the insistence he voiced during our previous interview, “but I do see them as an essential finishing touch to any prestige car. I think that if you have a really nice car it sets it off beautifully. I moved one of my number plates to another car, which left my Bentley Continental with just an ordinary plate. That was just so ghastly, that I had to go and buy JM 19. Good numbers are both an investment and something to enjoy. There’s no doubt about it, they really do set a car off nicely, so I think they’re certainly worthwhile.”

Ownership of a two-initial, number one registration is not a common thing. To own both of the number one configurations for a set of initials is almost unheard of. Sir John owns JM 1 and 1 JM, both of which adorn Rolls-Royces. He also has JM 2 on his Jaguar XJ220. Perhaps the most amusing of his personal plates is on his AC Cobra. Imagine, if you will, a neat yellow sports car casually cruising past you on the motorway. As it vanishes into the distance you notice the number plate B1 BYE (bye bye!).

That one must have raised a few smiles in its time. But Madejski’s money isn’t all spent on rich boys’ toys such as expensive cars and football clubs. He has contributed millions of pounds to a variety of good causes, including the Fine Rooms at the Royal Academy of Art in Piccadilly, a piazza and garden at the Victoria and Albert Museum and the John Madejski Academy in Reading.

“It’s only about two or three years ago that I got involved with the Academy, but it’s one of the best things I’ve ever done. It’s changing lives, you know, changing lives for the better and helping people. The kids have responded really well. The whole thing is just brilliant.”

The John Madejski Academy is recognised as having a sporting focus, but it is a fully-fledged educational establishment. Madejski’s enthusiasm for the project is obvious.

“It’s for 11 to 16 year-olds. It’s a proper secondary school, one of the inner city academies.”

His contributions in so many areas have earned him a range of honours. He is an honorary Freeman of the Borough of Reading; as Chancellor of Reading University, he was awarded an Honorary Degree of Doctor of Letters. In 2000 he was awarded the OBE and in the 2009 New Year Honours, he was knighted.

Sir John takes obvious delight in the recognition he has earned. “The knighthood, that was very exciting. Yes, very nice indeed. And I’m a doctor now. You didn’t know that, did you? Doctor Madejski, innit! It’s great.”

A less robust person could suffer an identity crisis: Mr, OBE, Doctor, Sir... But Madejski doesn’t have time for that kind of thing. At an age when many people are enjoying retirement, he is still a busy man.

“I’ve normally got a pretty full schedule and I just follow that most days. Although there may be some days when I wake up and look at my diary and there’s nothing there, but within about two hours it’s totally full for the rest of the day. I’m always on the go, there’s just no let-up. You know, I probably do too much really. I’ve got 18 companies globally and I should think about downsizing.

“Actually, I’ve got a lovely hotel in the Galapagos Islands called the Royal Palm. It comes with just under 400 acres and if any of your rich customers are interested, it’s for sale!”

But in the next breath, all thoughts of downsizing seem to have been forgotten. “It is stimulating, and these times are stimulating. We’ve had recessions before. This is a particularly punitive and difficult one but, you know, as with all recessions, you can come out a lot stronger afterwards. Hopefully, that will be the case this time.” What projects is Sir John looking forward to in the near future? “Oh, my article in the Registration Transfers magazine!”