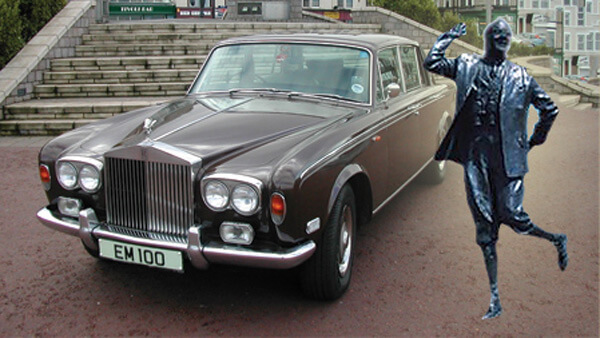 It was a sad day when Eric Morecambe's wife, Joan, decided to sell his beloved 1974 Rolls-Royce along with the number plate, EM 100. She had previously said that she couldn't bear to part with it, but finally relented after the car had stood solemnly in her garage for over 20 years.

Eric, the whackier half of the unforgettable comedy duo, Morecambe and Wise, enjoyed touring in the car and ensured that it was well looked after through the years. It had only travelled 74,000 miles and even had its original eight-track stereo and some of his favourite tapes inside when it finally went to auction at Coys in London, on December 4th, 2005.

It was expected to fetch around £24,000 but finally realised over £36,000, somewhat to the surprise of Joan. She knew how much the car had meant to Eric and how it also showed that he had "arrived", but she always felt there was something about it that made her not want to let it go. Joan admitted that she should have sold it years ago but being a terrible hoarder she just clung onto it without really understanding why herself.

The car, and its famous registration, was purchased on the day by an anonymous bidder on behalf of three enthusiastic private buyers from East Lancashire. Apparently they have set up a company called Legend Cars and intend to use it for charity work and event hire, both areas that we feel Eric would find fitting. At the time Joan remarked, "I hope the next owner enjoys the car every bit as much as I know Eric did".

Eric sadly died in May 1984 and is especially missed by many of our own employees as he was a director of our local football team, Luton Town.