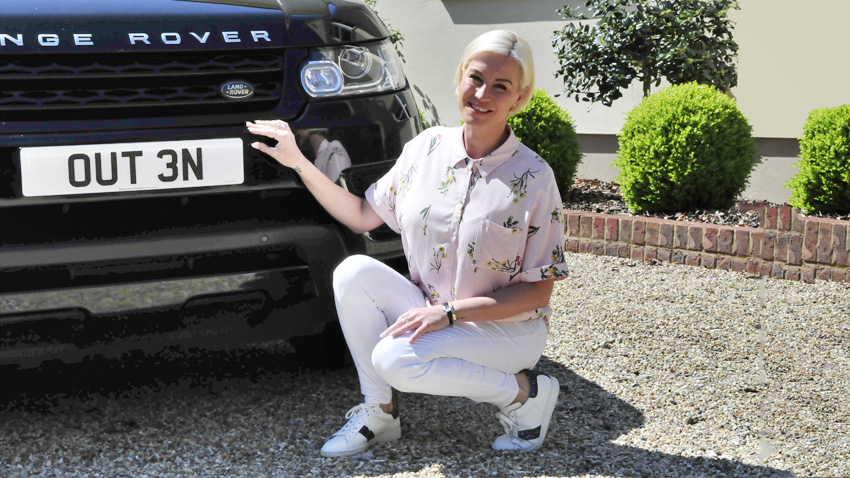 Denise van Outen seems happy. She and her partner have recently moved house, she is working regularly and she’s still finding time to play golf - one of her consuming passions at the moment. Oh, and she also has a brand new personal number plate.

“I love it, it’s brilliant. I go to a lot of golf events and there are just so many people there. When I come out afterwards and just want to leave I find they all have the same car as me, but now I’ll know exactly how to find my car, so it’s perfect! And it’s a bit of fun. You want your own identity when you buy something. Your car should be like that and should reflect your personality.

“I did have a number plate on my first car years and years ago when I was really young. That one had ‘Den’ on it, but it was a long time ago. My brother took it. He had the car off me and he kept the number plate. I haven’t seen it since! It was like my first car.”

The “years and years ago when I was really young” makes Denise sound ancient, which she clearly isn’t. In fact, when one compares photos of Denise during her early TV career on The Big Breakfast in the 1990s with more recent snaps it is startling how little she has changed. Her new(ish) obsession with golf alone must help keep her in trim.

“When I turned 40 I wanted a new challenge and hobby that took me outdoors. Something that involved walking. I like to be busy, and all my friends play, so I started having lessons and then just fell in love with it.

“This house we’ve just bought is a mile from the course so hopefully we’ll start playing a lot more and I’ll get my handicap down. I don’t play as much as I should, although now the weather’s picked up I’m starting to play a lot more. Obviously, we’ve been rained off a few times because of bad weather.”

When she’s not playing a round on the golf course, Denise’s general lifestyle continues to burn those calories.

“I’m so busy and I run around a lot. My work involves me being busy and active. If I’m in a show then I’m dancing, so that keeps me fit. The golf, also, because of the walking… I think I’m just always busy. I’m not a gym bunny.

“I’m not as fit as I would be normally, I think. Over the last couple of months, while we’ve been moving and everything, I’ve done less exercise because I’ve been so busy. And I’ve been on tour, travelling around, which makes it tricky to fit in any exercise. You’d think that I’d be doing it all the time because when you’re staying in a hotel you’ve got access to a gym, but when they throw you in with a load of twenty-somethings who go out drinking after the show, it never happens. Nine times out of ten I was still in bed at 11 o’clock in the morning!”

There’s more to Denise’s look than just being fit and healthy. She looks as glamorous in real life as she does on the telly.

“Oh, I definitely don’t look glamorous all the time! But thank you.”

“I don’t really want surgery or anything. The treatments I have are quite good because they’re laser, they’re non-invasive. I’m quite an advocate for saying you don’t have to go under the knife. I think there are other ways you can often get the same results. The guy’s good. He’s coming over later today, actually. I’m going to have a facial, but this is just one for cleansing.”

Back in her Big Breakfast days, Denise didn’t look after herself quite so well.

"Golf is clubbing for the middle aged"

“Yeah. The ‘90s were a bit of a blur but I’ve got photographs so I can look back on them! It was a fun time. I sort of miss it really but I just couldn’t do it now. I’d be too tired and I like my sleep too much. Golf is clubbing for the middle-aged. All the people I see on the golf course are people who used to be out at the clubs. We’ve just reversed it - we do it as a day thing now. We play golf during the day and then hit the clubhouse and get drunk there instead. At least these days we get to bed at a reasonable hour.”

“I’ve just done the Dancing on Ice arena tour as a judge with Chris Dean and Jane Torvill. Obviously they’re the skating experts, but for the judging panel, they wanted someone who could come in and judge performance. Because I’d done a lot of theatre they asked me if I’d judge that aspect, just so they had it all covered. That side of it isn’t really Chris and Jane’s bag, that whole entertainment thing. It was really good, I loved it.

“The tour finished a week and a half ago, so now I’m back to doing Loose Women. I don’t do that every day: I do either a couple of days a week or a couple of days every two weeks. It depends really. There’s a group of us and we kind of work it all between us. The producer will often call me if someone’s off sick because I’ve got a flat in London so I’m one of the local ones and I can get in quite quickly, whereas some of the other loose women like Coleen (Nolan) and Lisa (Riley) live quite far out, up north, so it’s tricky for them to get in. I do enjoy it. It’s good and we have a giggle.

“It’s quite a busy year really because Ireland’s Got Talent starts again, so we’ll get busy with that towards the end of the summer when they start the audition process and everything. I’m also in talks to do another West End show, which I’d kind of like to do this year. I always try to have a bit of a break between West End shows because they’re so time-consuming. I normally do one every couple of years and I’ve started to get that itch again to do another one. The last was my one-woman show, Some Girl I Used to Know, that I did at the Arts Theatre. That was a couple of years ago now.

Does Denise van Outen ever just sit around and chill?

“I don’t really relax in that way. I don’t sit around and watch box sets and things. I like golf. I like going for a drive. The nice thing about moving - because I lived in my last place for about 10 years - is that we’re sort of exploring the area so it’s quite nice to take the car out and go for a spin, especially when the weather’s nice. We’re discovering all new places to go. We’ve found some nice little pubs and restaurants and you can only do that really by going out. I look online but you really have to go out and try these places yourself. It’s good.”