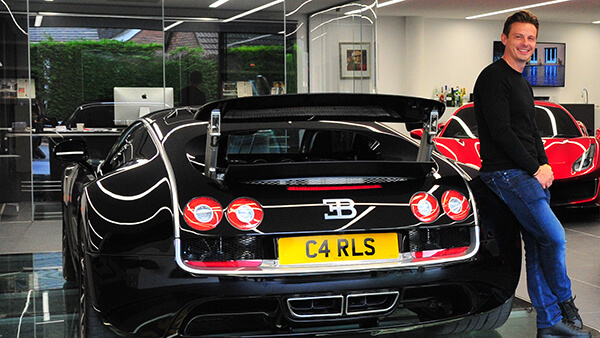 Regular readers of The World of Personal Number Plates will know of the near-legendary Tom Hartley supercar dealership. Those wealthy few who like to be the first in the UK to own the latest elite, performance car will definitely know the name of the man and the company renowned for achieving the near-impossible and obtaining the virtually unobtainable.

On our latest visit to the company’s new showroom in Overseal, Derbyshire, our team spent time with Tom Hartley’s younger son, Carl, who is co-owner and director.

Carl’s father’s adventure in prestige automobile sales began in 1973 when, as a 12-year-old boy in Glasgow, Tom Hartley sold his first vehicle. No, that’s not a misprint or faulty research: it’s just history.

Tom felt little inclination to attend the school that, he says, had labelled him a dunce. Apart from his disdain for the disparaging attitude of the institution, Tom was soon far too busy making money to go to school. By the 1980s Tom Hartley had moved south and had established a base for his growing business in Derbyshire, the county that remains its home to this day.

The unorthodox example set by Tom Sr has been followed by his two sons, Tom Jr and Carl. Both younger Hartleys joined the family business at alarmingly precocious ages (although Tom Jr has since moved on to other ventures) and both sold their first cars before reaching their teens. The scepticism towards traditional education is another trait that seems to be in the Hartley blood.

The dealership is a true family business and it’s not the exclusive domain of the men. Tom Hartley’s daughter, Priscilla, is the company’s financial controller. As Carl Hartley shows us around the impressive building, he explains how he followed his father and elder brother into the world of supercars.

"I came into the business aged 12"

“I came into the business after I left primary school at around 12,” Carl says. “I never went back to school after that so the business is actually all I’ve ever known. For me, being around it was always normal. A bit different to normal for other six, seven or 10-year-olds but, for me, it was everyday life.”

It is hard to look around the Tom Hartley showroom and entertain the phrase “everyday life”. The setting, like the business, is completely extraordinary and so it should be. With tens of millions of pounds in stock displayed for the benefit of potential customers, the new facility is not just a showroom: it is a gallery. Everything about the new building is designed to impress and to show the amazing vehicles to their very best advantage. Lifts, turntables and glass floors allow the cars to be viewed from 360 degrees in any plane. You want to see what the underside of your new Bugatti looks like? Step this way, madam. The lighting alone was a major project involving a team of specialist lighting designers whose brief was to provide illumination to accentuate every clean angle and seductive curve of whichever bank-breaking supercar may be on display. Tom and Carl seem to have thought of everything and once they had thought of it they had it built.

The showroom is like the set of a utopian science fiction movie where everything is spotless and light gleams from countless glass and gleaming white surfaces. The thinking behind this facility is clear: We are in a class of our own, ergo, our new showroom will be unlike anything any other dealership has ever dreamed of.

Step outside and the visual overload continues at the lake. If we thought they had thought of everything when we saw the showroom we were mistaken. Bordered by grass and trees, the lake is the setting for yet another jaw-dropping experience. It is not unusual for visitors to the Tom Hartley showrooms to be greeted by the sight of a £100,000 performance car driving serenely across the surface of the lake. Yes, we do literally mean the wheeled equivalent of walking on water. Thanks to a miracle of design and engineering, the Hartleys found yet another unique way of showing off their product. If you’ve ever seen those photographs of Alpine scenes with mountains and blue skies reflected in clear, mirror-like lakes, you’ll be able to understand the potential. Pick the right day and the perfect promotional photograph is in the bag. The seemingly impossible effect is achieved by means of an ingenious bridge that crosses the lake just below the surface. It was a challenging and expensive detail but Carl and Tom consider it money well spent. After all, if a customer wants a great spot to land their helicopter, the bridge is up to the job. How many other car dealers can offer that? OK, now they have thought of everything.

“Over the years the business has expanded, expanded, expanded,” says Carl. “We just needed more room. We wanted to keep everything on-site and part of the estate, as we all live here. We were very lucky with planning and we managed to get this incredible 15,000 square-foot, three-storey showroom passed so we started building straight away. It has given us more room to hold all of our stock and to expand for more stock.

“If you look at how the cars are arranged, they’re spaced pretty sparsely because that’s the way we wanted to keep it. If need be we could fit a lot more in here. This showroom at the minute has probably got 42 or 43 cars in it. You could fit 60 in here quite easily and another 20 in the original showroom, so we can carry 80 cars.”

The thought of 43 cars of the calibre of those surrounding us is staggering. The thought of 80 of these stellar vehicles in one place is, frankly, almost unimaginable. It’s an appealing concept though - just think of all the top quality private registrations the purchasers of those cars might need!

The Hartleys, like many owners of elite vehicles, consider cherished cars and cherished number plates to be a natural pairing.

“It can take a car from being something you look at to something you stare at. You know, a nice car goes by - a Ferrari - and suddenly you see it’s got a cool number plate on it and you’re like ‘Oh my god, look at that plate!’ I get as much attention for my number plate as I do for the car.”

Naturally, Carl owns his own cherished numbers. “I have ‘Carl’s’ (C4 RLS) and I got my wife her name which is Mitzi (M1 TSY). Then I’ve got some number plates that are relevant to models of cars: 488 Spyder (488 SPY) and others. I am looking to expand that because now we’ve had kids I’ll want some plates for them.

“The family have various plates. We’ve all got our names or initials. My sister, Priscilla, she has the number plate ‘Cilla’ (C1 LLA) which was bought for her from Regtransfers. My other sister, Stephanie, has got her initials, 3 SH. My dad’s got TH 2 along with various TH number plates and my mum’s got 1 PPH, which are her initials. Yeah, we’ve got all sorts of plates. “I was talking to [Regtransfers MD] Tony Brown earlier and I told him the last thing that would leave my possession would be my number plate. I’d sell my house first!”

We know that Tom Sr doesn’t bother owning a car of his own: he tends to use whatever Rolls-Royce happens to be in the showroom at the time - and there are always a few - but what about Carl?

“I have a few personal cars but the two I use the most are my Bugatti and my Volkswagen Golf. People who know me give me a lot of stick because I turn up to the most random places in this Volkswagen Golf when someone would expect me to take another car. We have 60 cars I could choose from, you know, but the Volkswagen Golf’s the best car ever made!”

We find it hard to believe that there isn’t an unspoken asterisk and an implied disclaimer saying “Exceptions may apply” attached to that comment. Nevertheless, it shows that the total immersion in supercars hasn’t blinded Carl to the everyday practicality of an accessible production vehicle. The Hartleys still live very much in the real world. They are certainly not ladies and gentlemen of leisure: Carl and Tom both work very long hours and are on call 24 hours a day, seven days a week, 365 days a year to provide the service that has made them famous.

Despite the spectacular changes and developments that have accompanied the company’s growth, and the changes still to come, the Hartleys haven’t lost sight of their place in the local community. After all, the village of Overseal isn’t just home to the showroom: it is home to the family and has been for decades. This connection with the area was made all the more obvious in 2018 when Tom Hartley stepped in with a substantial contribution to the village church in Overseal upon being told it was in danger of deteriorating through lack of funds.

How does Carl see the future shaping up for Tom Hartley?

“I see the business going in the same direction as it’s been going for the last 47 years, which is onwards and upwards. Hopefully, in a few more years we’ll need to build another showroom to hold all of our stock.

“We aspire to move forward constantly as we grow which means we recognise that electric and hybrid cars have certainly made an impact. It will obviously go more that way in the future but there will always be a high demand for petrol cars. People love the feel and noise of a naturally aspirated V8 or a turbocharged V12, but we have the ability to adapt to any kind of market; it’s something we’ve been able to do for over 45 years.”

“We’re looking forward to new models from Ferrari and Porsche, in particular, this year. If you want to skip the waiting lists, give us a call.”