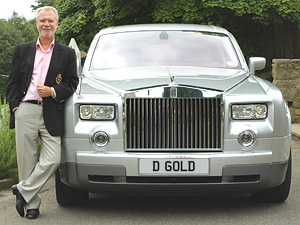 Anyway, I pulled up at Birmingham City Football Club one day, and this couple came up to me and asked if they could have their picture taken with the car. I said they could. They told me that they saw me every week and that I always overtook them on the M40 as they came up from Seven Oaks to the football match at Birmingham. They said, ‘And we always recognise you and we recognise your number plate.’ I thought yes, of course, you recognise my number plate, D GOLD on the Rolls Royce’. But they went on, ‘Yes, yes we recognise your number plate D6 OLD’. So for a moment there I thought the car and I were quite famous, but clearly we’re not. They recognised ‘old’, not my name!”

David clearly loves his name and is very proud of it. What better name for a businessman? It works on so many levels.

“When I think of promoting the name Gold, you can promote it with Goldfinger, you could have gold bullion, gold medals, gold star. You see, it’s so easy to promote that kind of name. I think I’d rather have Gold than Branson. Although, I’d rather be as rich as Richard Branson!”

One number that David owned caused him a few headaches.

“Ah, ‘Birmingham City Football Club’, 13 CFC. I had a Chevy people carrier that we used when we went to football – that was before we used to fly – and wherever I went we got a ticket. I remember it happening at Norwich, Oxford, Aston Villa. I went to Swansea once and we were running late and the police pulled us over because the 1 and the 3 were too close together.

I sold it in the end because I got fed up with the pettiness of the bureaucracy. And, I must say, the irony of it was that my driver was caught speeding by a camera, so how illegal could that plate have been? Do you see what I’m saying? If the camera can read it, what is the fuss?”

Speaking of Birmingham City: at the time of the interview, Birmingham were still fighting to achieve promotion back to the Premier League. We recalled that there was some considerable upset when the team suffered relegation last season.

“Upset? We were all upset. You know fans are passionate, I’m passionate. We were relegated, so my next thought was how

I get the football club back into the Premier League. Whereas fans, they’re angry. Their passion turns to anger. You know, not thousands and probably not hundreds, but some do get very, very angry and disappointed. People want to win. That’s what drives us.

“But upwards and onwards. We’ll be promoted.”

Happily, that prediction has since been proved accurate, much to David Gold’s delight, and other business interests are also doing well.

“Ann Summers is thriving. We have just opened a new store in Liverpool and during 2009 we plan to open a further five stores taking it up to a total of 140.”

One of the innovative aspects of the Ann Summers business model was the party plan approach that had previously been more commonly used for kitchenware and fashion lines. How is that side of the business going?

“The parties are as popular as ever. When we opened our first store, nearly 20 years ago, our party planners thought it would mean the end of party plan. 135 stores later, party plan is still as vibrant as it ever was. I must confess that I always thought that opening stores would reduce the amount of parties, but apparently not.

“There use to be a stigma about people going into stores, so that’s why the parties were so popular. But now everyone can walk into Ann Summers because it’s just like walking into any lingerie store. So, now that anyone, guys, girls can go at anytime,

I expected that the parties wouldn’t be as popular as they use to be. Retail stores were a different kind of experience.

You know, husband and wife could go in there, boy could go on his own, singles could go on her own. So it is a different experience to party plan. And maybe that’s why they’ve both grown and flourished side-by-side.”

Despite being well known for the adult-oriented publishing that has characterised much of his business career, his most recent publishing experience has been along very different lines. His autobiography, Pure Gold was published in 2006, but he is already re-writing it.

“I’m going to redo it, and update it. I might change the title from Pure Gold to…Solid Gold.”

We are looking forward to the new version.